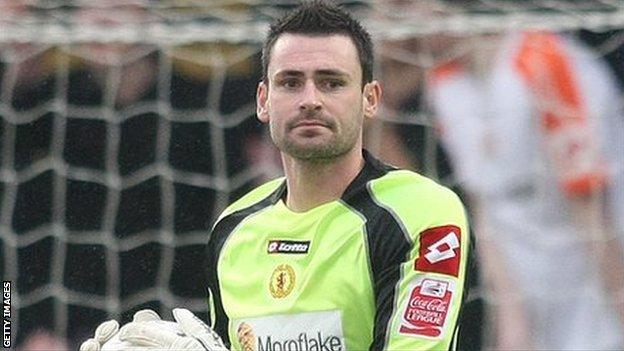 Crewe Alexandra keeper Steve Phillips insists that he is not prepared to give up his jersey easily if he is recalled for Johnstone's Paint Trophy duty.

Phillips has not played this term, having lost his place to Alan Martin after a pre-season knee injury.

And the fact that he is also Crewe's goalkeeping coach only adds to the 34-year-old's growing frustration.

He told BBC Sport: "I didn't sign a two-year deal at this club at my age to be number two for the next two years."

But, in the wake of Saturday's disappointing 1-0 FA Cup exit at home to Burton Albion, Phillips does not want any recall to be viewed simply as a one-off.

"I don't want to just step in for the JPT, then sit back on the bench," he told BBC Radio Stoke.

"Injury forced me to miss the start of the season and Alan took his chance.

It doesn't feel like I've had a proper taste of it yet, when I was a regular all last season

"I'm pleased for him and I'm pleased I've helped his progression. But I signed here on a two-year contract to be the number one and I want my shirt back.

"Alan's staked his claim and I've been more than happy to wait for an opportunity.

"But if that's tomorrow night, I'll go in and do my best. Then we'll see what happens for Saturday."

Another of last season's Wembley play-off final heroes currently out in the cold is centre-half Adam Dugdale, who lost his place following the 5-1 thumping at Brentford in August - and has only made four substitute appearances since.

"But I've just got to be prepared to wait. I've trained hard every day and have been doing well in the reserve games and there's nothing more I can do.

"I spoke to Steve Davis a few weeks ago and asked about my situation. I'm not one of the younger lads.

"He said you've got be patient. Loss of form or an injury will get me back in the side and I've just got to be ready."