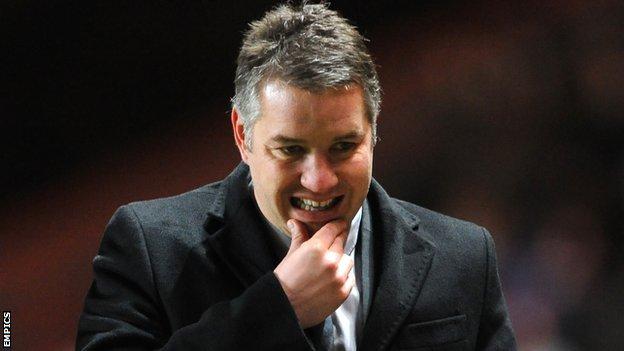 Peterborough United boss Darren Ferguson has said he will not walk away from the job of trying to keep Posh in the Championship.

Saturday's 4-1 loss to Blackpool means they remain rooted to the bottom of the table, four points adrift of safety.

"But Saturday was deeply disappointing and the second half was as poor as anything I can remember."

Posh have picked up just one point from their last seven games and have won only four times all season.

After a goalless opening 45 minutes against the Seasiders, Posh fell apart and conceded four goals in front of a subdued London Road crowd.

"It's really difficult for me to defend that second-half performance. It's indefensible," said Ferguson.

"It goes to 1-0 and after that it was embarrassing.

"We win together and lose together. That will never change. But if I was a neutral watching that I would think 'they're in trouble'."

Chairman Darragh MacAnthony has reaffirmed his faith in the Scot and promised funds to bolster the attack in January.

The loan departures of Tyrone Barnett and Emile Sinclair, as well as an injury to Saido Berahino, have left Ferguson short in forward options.

"He'll definitely get support in January. I'll always back him. We've got four weeks until the transfer window opens.

"We've got to get through a really tough Christmas period and pick up results with the squad we've got. If we need more firepower we'll bring in one or two."