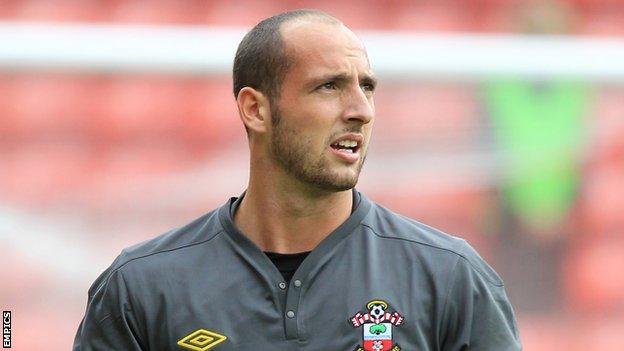 Gillingham goalkeeper Tommy Forecast was pleased to make his first start for the League Two club since September.

The 26-year-old, who is on a season-long loan from Southampton, played in Saturday's 2-0 FA Cup defeat by Preston North End.

He told BBC Radio Kent: "It's difficult but you have to be professional.

"It felt good to know I was going to play 90 minutes and get a game under my belt. It was a big game and being in the FA Cup made it even more special."

He added: "I want to have more of these occasions in my career."

Forecast was given a chance in the first 11 as regular number one Stuart Nelson was serving a one-match suspension.

The former Tottenham trainee, who is on his fourth loan spell away from St Mary's, accepts he is back-up to Nelson.

"Me and Stuart have a good professional relationship and we enjoy working together during the week," he said.

"He and the team have been doing well. [I've got] no complaints on that part.

"It's good to be a part of a team that is being successful and working hard together.

"It is the same at every club. When you are a goalkeeper you learn to adapt to that situation, knowing that there is only one spot for you to play.

"You have to be a strong character when you are not playing regularly.

"When you are in, you have to forget the situation and the fact you haven't played in a while and get on with it."