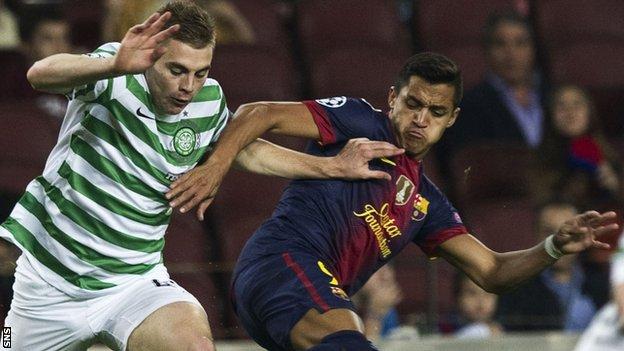 Celtic winger James Forrest believes his team-mates can secure a place in the last 16 of the Champions League.

Forrest, who is sidelined with a hamstring injury, expects them to beat Spartak Moscow on Wednesday.

"I'll be gutted to miss the biggest game of the season but that's what happens," he said.

"I was devastated to miss the Benfica game and now Spartak but I'm sure the boys will aim to get through."

Neil Lennon's side host the Russians while the Portuguese travel to the Nou Camp to face group winners Barcelona.

"(The injury) has been a bit frustrating, but I'm getting there now and hopefully will be back training within the next two weeks," Forrest said.

"The boys have faith that they can get through. Since we haven't been in the Champions League for the last four years, it would be a massive achievement.

"We've got the squad to compete in all competitions and we know we can cope with them all."