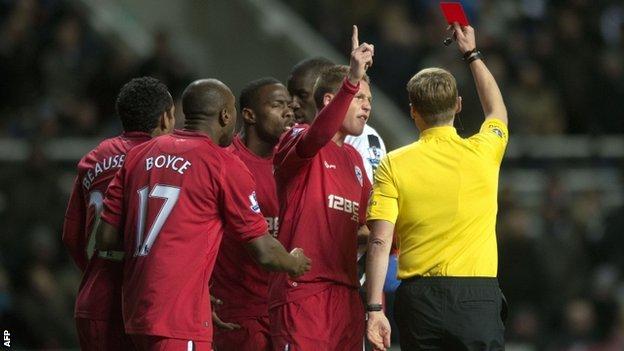 The defender was shown a red card for a shove on Papiss Cisse which led to the home side's opening goal from the penalty spot.

Asked if he would appeal, Martinez said: "We will look into it.

"I think a penalty and a red card is too much punishment. I thought it was harsh."

He added: "It's a big decision and you need to be certain about a decision like that."

Figueroa is set to miss Saturday's clash with bottom side Queens Park Rangers, as will centre-half Gary Caldwell, who is suspended after a picking up a fifth yellow card of the season.

Honduran Figueroa was the last man in defence for Wigan as Magpies striker Cisse burst into the penalty area.

Figueroa moved across to block off the Senegalese and referee Mike Jones awarded a penalty, showing the defender a straight red card for denying a clear goalscoring opportunity.

On the incident that led to the sending off, Martinez said: "The ball was between the two players, Figueroa is entitled to challenge for that ball and I thought it was shoulder-to-shoulder.

"It was a fair race and both players challenged for the ball. You expect the defender to be strong and the striker to go down easily."

Wigan in the red

Demba Ba drilled home the penalty and went on to get another before Gael Bigirimana completed the victory with a superb curling shot.

Martinez was pleased with the response of his players, who caused Newcastle plenty of problems despite playing with 10 men for nearly 80 minutes.

"It became a very, very difficult game in 10 minutes, giving up a two-goal cushion and a man down," he said.

"But you will get adversity in football and I'm proud of our reaction in the second half, we never gave up or felt sorry for ourselves."