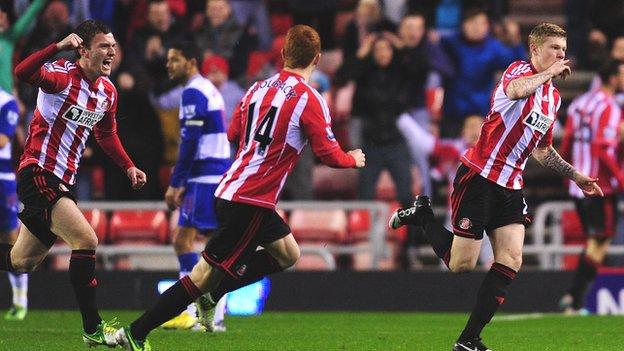 Martin O'Neill celebrated a year in charge at Sunderland with an important victory over Reading that lifts the Black Cats out of the relegation zone.

O'Neill's side got the best possible start when James McClean fired in on the turn with just three minutes gone.

And they strengthened their grip on the game when Steven Fletcher back-heeled Danny Rose's cross in from eight yards.

Exactly a year ago, O'Neill oversaw a 2-1 home win over Blackburn in his first game as Sunderland boss - the first of seven victories in 10 games that convinced Black Cats fans they had found the ideal man to restore their flagging fortunes.

The general feeling at the Stadium of Light in the aftermath of this result - just a fifth win in 30 games - will be less one of unbridled optimism and more one of relief as their side claimed just a second home league win of the season to move up to 15th in the table.

However, the Sunderland support will also take heart from a performance that showcased the kind of desire and positivity their side have been lacking over a 10-month period that has left them little better off now in terms of league position than they were 365 days ago.

"Brian McDermott will be very concerned. His team were very lacklustre and didn't threaten until the last 10 minutes. 3-0 is a deserved result, with Sunderland by far the better team. It was that early goal that was key, relieving the pressure on the team and the manager."

O'Neill's side demonstrated attacking intent from the off - something they were rewarded for in the third minute with McClean's neat finish from just inside the box after Royals keeper Adam Federici had punched away Adam Johnson's corner - and maintained their commitment to the cause during the rare periods Reading came back into the contest.

Fletcher's seventh goal of the season - an improvised finish as Rose's cross reached him with his back to goal - proved to be the game's decisive moment as it provided the home side with a lead too great to be overhauled by an industrious but blunt Reading side.

The game could have been over as a contest at the break had Sebastian Larsson or Sessegnon shown a touch more accuracy with their shooting from range or Fletcher been able to keep his header from a corner down.

It could have been a different story had Alex Pearce not put his shot from close range past the post with the score at 1-0 or had Nicky Shorey not been denied by Simon Mignolet with a 20-yard free-kick in the second half that would have set home nerves jangling.

The visitors only other significant chance came in the closing stages when Noel Hunt's close-range header from a corner was clawed away by the Sunderland keeper just minutes before Sessegnon ran clear of the Royals defence and rounded Federici before finishing.

Instead, Royals boss Brian McDermott is left to reflect on a fifth straight league defeat and a return of just two points from nine away games that leaves his side six points from safety.

Reading chairman John Madejski has already rejected as "totally absurd" the suggestions that McDermott will be sacked but unless the 51-year-old unearths some quality to match his side's effort he will be overseeing their return to the Championship in May.

Thanks in part to their superior budget, Sunderland possess the requisite talent to keep them in this division but if O'Neill is to make more progress in his second year than his first the Black Cats board may need to fulfil his wish for further additions in January.