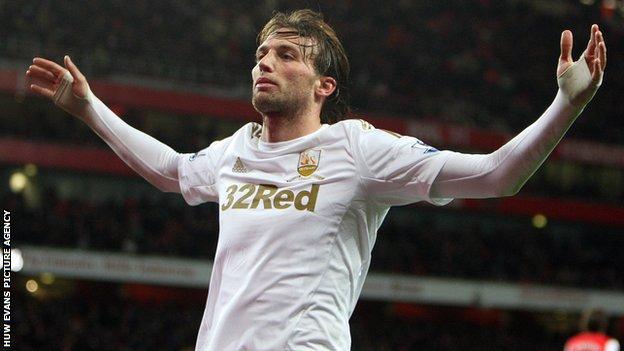 Swansea City chairman Huw Jenkins has insisted top scorer Michu will not be sold in January.

"We'll be looking to strengthen in January, not to weaken our squad," said Jenkins. "We'll make every attempt to make sure that happens."

Jenkins said manager Michael Laudrup will be given money to spend to improve the squad's strength in depth.

"Michael's after one or two players in all areas - a forward, midfield player and a defender," he said.

Michu has won many admirers by scoring 10 goals in 15 Premier League games since joining Swansea from Rayo Vallecano in July.

Swansea could make a substantial profit on the £2m they paid to bring him from Spain, and Jenkins is convinced the 26-year-old is good enough to walk into any team in the division.

"We felt we had him at good value and with his goalscoring it's proved to be a good decision," added Jenkins. "We're very pleased with that one."

The chairman, who has helped turn Swansea into one of the best run Premier League clubs, stressed Laudrup will not be given a set budget to work within in January.

Any potential new signings and the size of the fee with judged on merit, he said.

But Jenkins acknowledged that the transfer policy has altered slightly over recent months as the club target players with pedigree rather than just potential.

"At this level of football they've got to be 100% ready," he said, referring to Michu and Pablo Hernandez as players who arrived with experience of playing in Spain's top flight.

"While it's great signing players with promise, everybody expects results, week in, week out."

Swansea have only lost once in nine league games - a defeat at champions Manchester City - and are seventh in the Premier League.

Assistant manager Alan Curtis says confidence is "sky high" in the squad, but insisted that their feet are "firmly on the ground" and stressed the importance of Saturday's home match with Norwich City.

"If you would have said Norwich on Saturday or Arsenal even now I would preferred to have beaten Norwich rather than Arsenal," he said.

"Obviously you want to win both games but for us on Saturday, Norwich is a far bigger game, far more important than it was last Saturday."