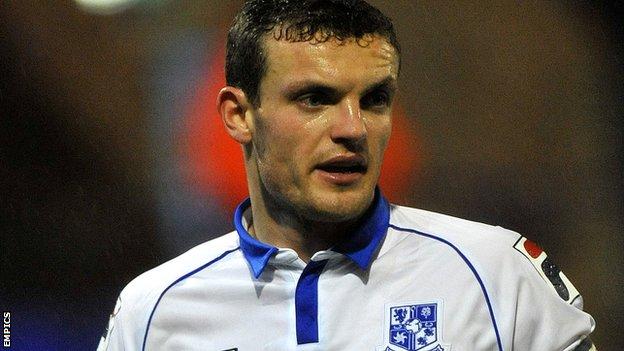 Tranmere will be without influential captain James Wallace for six weeks.

The former Everton midfielder, 20, damaged medial ligaments in the early stages of Saturday's 2-1 FA Cup second round win against Chesterfield.

Speaking after the game, manager Ronnie Moore told BBC Radio Merseyside: "He is such a clever player. He really shouldn't be playing for us.

"He should be in the Championship at least. Hopefully that will be with us next year. He's got so much quality."

Wallace has been in excellent form for the League One leaders since in the summer.

Moore continued: "We missed him. It's a bad injury for us. He put in a block tackle and he knew straight away, so that was the dampener on a good result for us."

Tranmere are currently without and winger Abdulai Bell-Baggie, while Joe Thompson, Andy Robinson and Paul Black have only recently returned to full fitness.

It leaves Moore short on numbers for the visit of struggling Portsmouth in League One on Saturday.

"We can't go and get anybody until January, so what we've got is what we've got," he said. "We'll probably just about get 18 for the next game, but there might be a few square pegs in round holes again."

But Rovers will have loanees Liam Palmer and Jake Cassidy available to face Pompey - both players were refused permission to play in the FA Cup by their parent clubs.