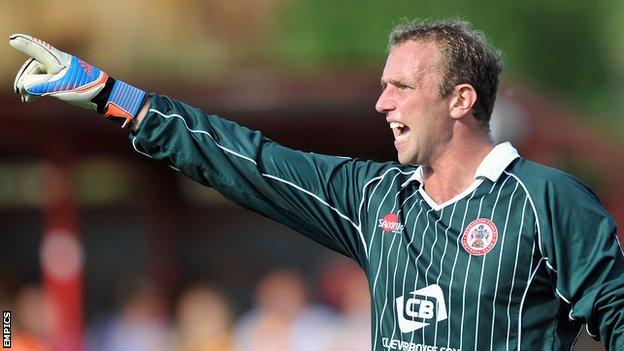 Accrington Stanley goalkeeper Ian Dunbavin will have shoulder surgery on Thursday, which is expected to keep him out for the rest of the season.

Dunbavin, 32, has been an ever-present in League Two this season.

"It's a blow because he's been fantastic this year. I think he's been having the best year of his career," said manager Leam Richardson.

prior to Saturday's FA Cup tie with Oxford.

I've been playing under-21 matches [for Leeds] at the age of 31. I want to be playing competitive football where the results matter.

The former Huddersfield and Blackpool keeper made his debut in the

Richardson told BBC Radio Lancashire: "Paul has been kind enough to come and lend us a hand. He's a top quality keeper and I'm really pleased to have acquired him.

"While the window is closed, you've got to keep renewing it week by week. We'll look to do what we can in January."

Rachubka had not appeared in a first-team match since a loan spell at Leyton Orient in April and he was especially pleased with his debut performance, considering the haste of his arrival.

"The call came at 10:00 GMT on Friday," said the 31-year-old, who began his career at Manchester United. "I was at the training ground at Leeds and a few calls later it was done and dusted.

"I missed training on Friday, so I just basically turned up on Saturday. I already knew a couple of the lads and it wasn't like I was walking into a completely new changing room.

"I've been playing under-21 matches [for Leeds] at the age of 31. I want to be playing competitive football where the results matter."