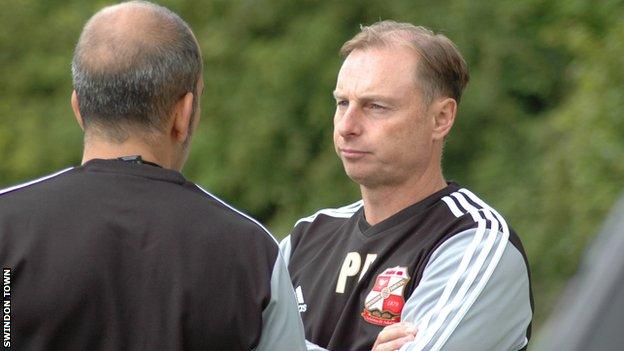 Coach Paul Bodin says his Swindon Town players must learn a "harsh lesson" from their 5-0 defeat by Liverpool in the FA Youth Cup third round.

Town found themselves 4-0 down at the break as Liverpool, who have won the competition on three occasions, cruised into the next round.

"It was a wonderful lesson for us," Bodin told BBC Wiltshire.

"As long as the players learned some harsh lessons out there then we can all move forward."

Swindon fell behind when Jordan Ibe's shot ricocheted off the bar and struck goalkeeper Josh Helm on the back and trickled in.

Ibe netted Liverpool's second before Jack Dunn scored a brace and Jerome Sinclair's strike finished off the game at the County Ground.

Swindon reached the final of the competition in 1964 but lost out to Manchester United.

"They worked their socks off but Liverpool are a quality team," continued Bodin.

"We keep the ball well in the league we play in but to play against them was another level. They spend millions of pounds on their youth team and it showed at times.

"It's hard to show your talent when you're four down at half-time - it was almost just chasing shadows. But they never gave up and a few of the lads can go with their heads held high."

Bodin's side could move top of the South West Youth Alliance league with a win over Oxford on Saturday and the former Wales international has urged his players to focus on their domestic form.

"They are feeling a little bit sorry for themselves but the league is still there for us to try and win.

"There's still months to go before decisions are made and it's almost like a fresh start from now.

"The glamour of the cup has gone and now it's about the bread and butter of the league programme."