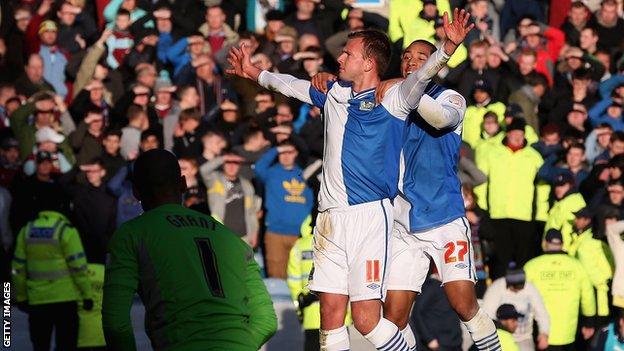 Defender Scott Dann has urged Blackburn to give Jordan Rhodes better service and help the striker to continue his impressive scoring start at Ewood Park.

for a club-record fee of £8m in August.

The 22-year-old netted the opening goal in his 11th in 17 appearances for Rovers.

"Jordan probably only had one chance and put it away. If we can get more service to him, he'll score a lot more goals," Dann told BBC Radio Lancashire.

When we went a goal up, we thought we were going to hang on and we were really disappointed not to

Scotland international Rhodes scored 40 times for the Terriers last season and has 16 in all competitions in 2012-13.

And the pressure of a huge price tag does not seem to have affected him as he is responsible for 11 of Blackburn's tally of 28 Championship goals this season.

"His biggest strength is that he's always on the move and he's hard to mark," said former Birmingham centre-back Dann.

"When the ball comes in, he gets across defenders and he showed that again on Sunday."

Dann added: "The lads who have played in it before had been letting us know what it was all about and we were told we couldn't lose the game.

"When we went a goal up, we thought we were going to hang on and we were really disappointed not to."