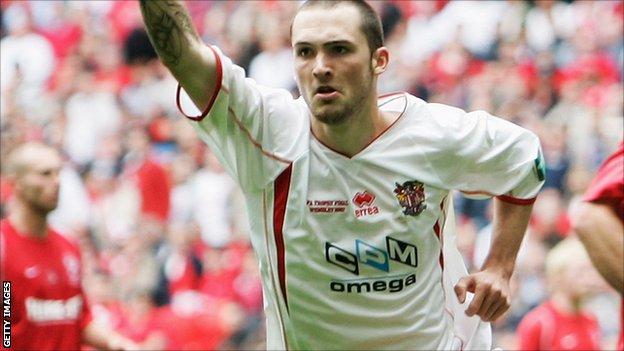 The League One club intend to stage the game at the Lamex Stadium next May.

Cole was part of the Stevenage side that lifted the first silverware at the new Wembley, scoring as they beat Kidderminster in the 2007 FA Trophy.

The winger also played for Southend and Oxford during his professional career but had to retire in February 2011 because of a heart problem.

Stevenage say they hope many of the players and management who were part of Cole's spell with the club will be involved in the benefit match.

Former Boro boss Graham Westley, now with Preston, has agreed to manage the team for 45 minutes and chairman Phil Wallace also wants Mark Stimson, the manager who brought Cole to the club, to be involved.

"It's such a sad, tragic loss of a young life. Mitch was a key figure for us in the seasons that saw us enjoy a lot of success," said Wallace.

"We all knew of his condition but it's simply devastating that a young man with such spirit is taken from us so suddenly.

"Our hearts go out to his family and also to the players and management that worked with him at Stevenage in his three years with us."

He added: "It will be a fitting tribute to honour Mitch on the football pitch and I've already had offers of help and encouragement from Graham, and skipper Mark Roberts, to contact the people involved in his daily life here, so that they can be a part of a day to celebrate his life."