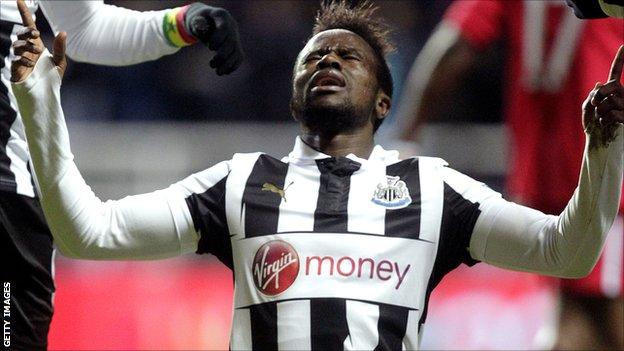 Newcastle United midfielder Gael Bigirimana is hopeful Monday's 3-0 success against Wigan Athletic can lead to a climb up the Premier League table.

The Magpies ended a run of four successive defeats in the league and extended the gap from the relegation places to five points.

"It was what we needed. Tonight was our night," Bigirimana told BBC Newcastle.

"It was written in the stars for us and hopefully this is where we start rolling and climbing slowly."

Three goals, two from Demba Ba and one from Bigirimana - his first career goal - ensured the highest margin of victory for Alan Pardew's side this term.

It is the latest highlight in a season of bright points for the Burundi-born 19-year-old following his summer move to St James' Park from Coventry City.

"I hadn't scored in the first-team before, and wow it's in the Premier League," Bigirimana added.

"When I scored I was trying to celebrate but I couldn't get out of my mind I'd scored at St James' Park in the Premier League.

"We all plan to do this or this, but when the ball goes in and you score you don't know what to do.

"I just had to give thanks to God, I'm thankful."