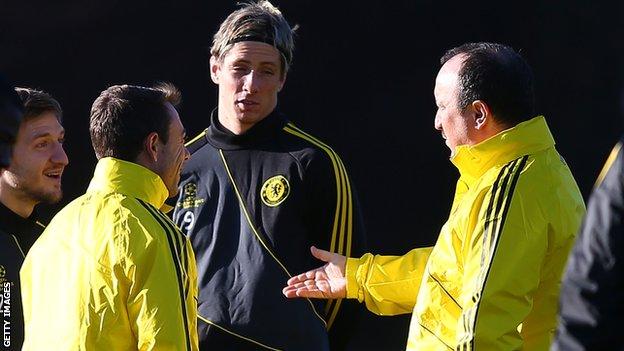 Interim Chelsea manager Rafael Benitez praised Fernando Torres's defensive qualities as he came out in support of the out-of-form striker.

Benitez was answering questions about whether Torres, goalless in six games, had lost his team-mates' confidence.

"It's not just scoring goals," said Benitez. "If you analyse the [defending at] corners in games he was amazing.

"He was two or three times clearing the ball and afterwards doing man-to-man marking. It's what he had to do."

Torres has struggled at Chelsea since a £50m move from Liverpool in January 2011 but Benitez, who managed his fellow Spaniard during a prolific spell at the Merseyside club, says the forward needs more help from his team-mates.

"As a striker you want him to score lots of goals but I would like to see maybe Fernando not scoring goals but the team winning and scoring a lot of goals from different parts of the pitch," added Benitez.

"The main thing is to win and Fernando is an important player for us. The others have to score as well.

"We have to create a better Chelsea for him and he will score goals and his confidence will go high."

Benitez has yet to win in his three games in charge since succeeding the sacked Roberto Di Matteo and Chelsea are facing the prospect of an ignominious Champions League exit.

The Blues have to beat FC Nordsjaelland in their final group game and hope that Shakhtar Donetsk beat Juventus to avoid becoming the first holders to go out of the group stage of the competition.

We are trusting him because Rafa wants the best for the team. Rafa is a very experienced manager and he's trying to help us. We're trying to help him.

"We have confidence that they [Shakhtar] can beat Juventus," said Benitez. "We have to win our game. It is not a miracle. It is hard work and sometimes a little bit of luck. We will try to do our job and see what happens in the other game.

"They [Shakhtar] have some good players who want to be seen around the world so I think it is important for them, a challenge. Everybody will be watching the game carefully so they know they have to perform."

Benitez insisted Chelsea's players are "committed" to the cause, despite the backlash over his appointment, and playmaker Juan Mata, 24, backed the Blues boss.

"We are trusting him because Rafa wants the best for the team," said Mata. "If we want to win the Club World Cup, or the Premier League or the other competitions, we have to do better.

He added: "The supporters are free to do whatever they want. My job, our job, is to play well and to win. That's all I care about.

"I always try to be focused on what I'm doing, nothing else.

"If we want to win, if we want to lift trophies this season we have to be all together, fight as a unit in the team."