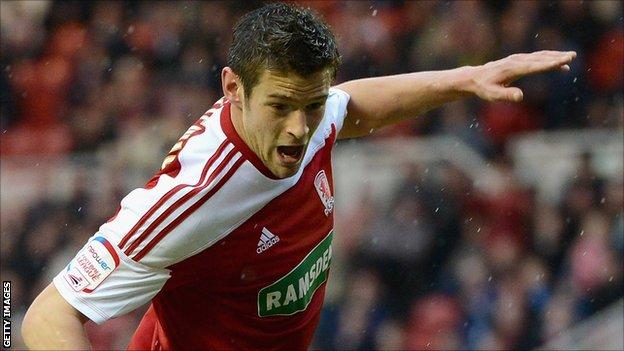 "When you look at the squad we should be confident of trying to be up there," Jutkiewicz told BBC Tees.

"If you're only a goal up a split second can change a game and maybe we need to be a bit more ruthless."

This season is the Teessiders' fourth in the Championship following relegation from the Premier League in 2008-09.

While rivals and neighbours Newcastle returned to the top flight at the first attempt, Boro under a succession of managers have failed to achieve the feat, missing out on the play-offs last season.

However this term, Mowbray's side have staked a claim for a promotion place with 11 wins from 20 games, and Jutkiewicz's return from injury has seen him score five goals to boost the bid.

"It's been stop-start, it's been frustrating for me to get fit and sharp while trying to get involved in the games," the former Coventry, Swindon and Motherwell striker added.

"I didn't have the luxury of the pre-season to get my fitness and sharpness but it's about playing catch-up and trying to help the team in any way I can."