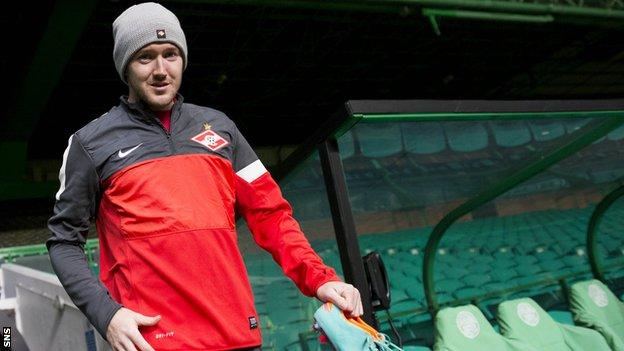 Spartak Moscow midfielder Aiden McGeady is not surprised that former club Celtic are on the verge of reaching the last 16 of the Champions League.

"They have performed very well," said McGeady. "The last game for themselves and Benfica is going to be massive.

"I'm a Celtic fan but we want to put on a show after a disappointing campaign. We want to save a bit of face."

McGeady returned as a second-half substitute in Spartak's 4-2 home defeat by Zenit St Petersburg after six weeks out with a foot injury.

But the 26-year-old Republic of Ireland international is not sure whether he will get the chance to make a first appearance as an opponent at Celtic Park.

"I hurt my knee in training after the Zenit game but I really want to play," he explained.

"We'll just have to see how it is tomorrow."

Spartak, who were beaten 3-2 at home by Celtic, have only picked up three points in the Champions League and have struggled domestically, dropping to eighth in their Premier League.

Manager Unai Emery was sacked at the end of last month and replaced on an interim basis by general director Valery Karpin.

"The team has been in turmoil for the last couple of months," admitted McGeady, who left Celtic for a £9.5m fee in August 2010.

On returning to the stadium where he played for the first six years of his career, he added: "It will be strange but I'm looking forward to the game.

"Hopefully, I won't get booed. I didn't leave on bad terms but everyone has their own opinions.

"I have told my team-mates that the atmosphere will be brilliant, with so much at stake.

"I've played in a lot of big European games for Celtic and have good memories from the last game against Spartak, as well as Shakhtar Donetsk, Manchester United and AC Milan."

Celtic captain Scott Brown is sure McGeady will get a warm welcome from the home supporters.

"I think Aiden will get a good reception," said Brown. "He did really well when he was here.

"He was a joy to play alongside and he was a fans' favourite as well so I am sure they will give him that (good reception) at the start.

"But once the game starts, we are there to win it and so is he. It will be heated, fast and an exciting game to watch.

"I think we all know Aiden is a huge danger. He is a very talented boy, he is going to be a threat."