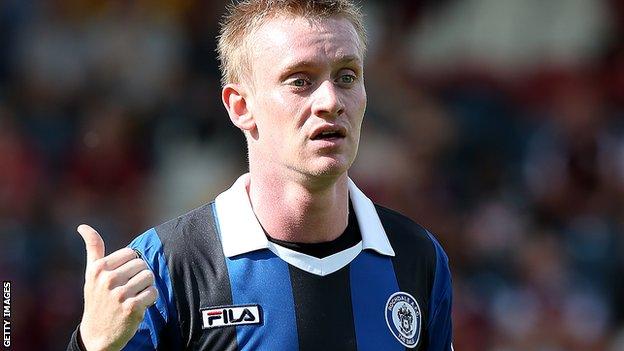 Ashley Grimes is eager to force his way back into Rochdale's starting line-up ahead of a busy festive schedule.

Grimes, 25, has had to be content with cameo appearances from the bench in each of the last two matches.

He told BBC Radio Manchester: "In the last couple of weeks, I've been in and out. I'm trying to nail down a spot in the team. I want to play every week.

No home comfort for Rochdale

"It's very frustrating because, as a striker or a forward player, you like to get a bit of momentum."

The versatile front man continued: "There's competition for places. Everyone wants to play and not everyone can, but from a personal point of view, I want to be playing in the team every week."

Grimes, who in August, has started 15 games in all competitions for Rochdale this season, scoring four times.

John Coleman's side remain on the fringes of the League Two play-offs after a on Saturday.

"We missed the chance to go fifth," said Grimes, who replaced Jason Kennedy for the final 11 minutes.

"That was our game in hand on the rest. We're still alive and we've got a chance of making the top seven, if not the top three."