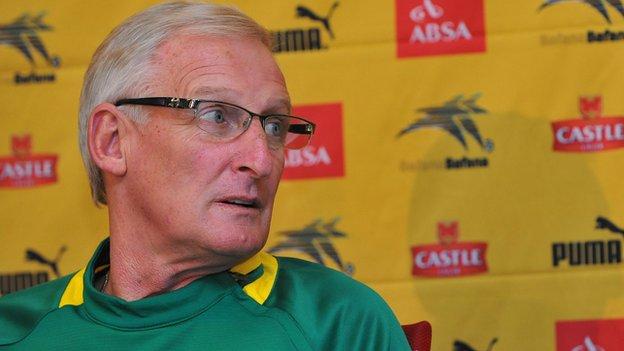 South Africa have added friendlies against Malawi and Algeria to their preparations for January's Africa Cup of Nations.

Bafana Bafana will play Malawi on 22 December in Durban and then Algeria on 12 January in Soweto.

They had already lined up a game with Norway on 8 January in Cape Town.

Hosts South Africa open their Nations Cup campaign against Cape Verde on 19 January, followed by Group A matches with Angola and Morocco.

Coach Gordon Igesund says he will start with a large squad for training camps either side of Christmas, and will name his final 23 players for the tournament after the Norway match.

"Because of the fact that we have a match against Malawi, then a three day break and then another camp, I can't call one squad for this and one squad for the other, so that is why I have called up a squad of plus minus 30 players and keep on changing them," he said.

"I would also like to give some of the players who have recently returned to action after injuries, a chance to prove themselves.

"This game against Malawi is like the other five games we have already played, winning and losing is not important.

"What is key is to give the players one last opportunity to convince me and my technical team that we are making the right choices.

"Intense preparations will start in earnest when I announce the final 23 players after the match against Norway."

Igesund is expected to name his squad for Malawi next week.