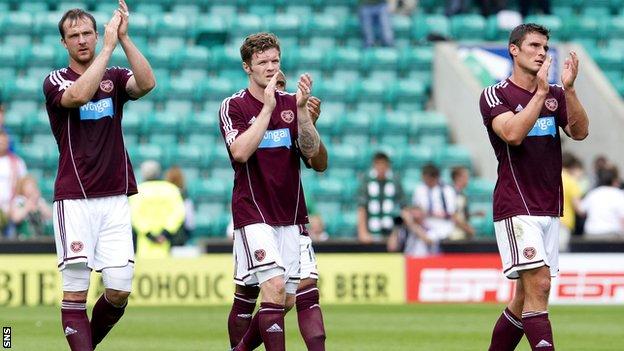 Hearts may be forced to jettison personnel in January if the Edinburgh club cannot bridge a predicted shortfall of £2m for the season.

Asked if the club would have to cut staff costs if targets were not reached, director Sergejus Fedotovas said: "This is a possibility.

"If that's what's required to keep the club in business, we will be forced to do that."

Fedotovas suggested to BBC Scotland that almost £1m had been raised.

"We are somewhere halfway through addressing the funding gap," he said.

A resolution has been agreed with HM Revenue and Customs in a dispute over tax and National Insurance contributions.

The £1.75m dispute was revealed in the share issue brochure as Hearts launched a scheme to raise £1.8m at the end of October.

Results this season show that the team needs attention

Now Hearts will pay £1.5m to HMRC over a three-year period.

The deal is separate to Monday's settlement of a £450,000 tax bill which ended the threat of a winding-up order.

The club's share issue will hand over 10% of owner Vladimir Romanov's controlling interest, with the scheme due to run until 19 December.

"We are still in progress with our share issue and that is designed to create stability," added Fedotovas in a bid to drum up further support.

"It is very important for us to achieve the target of selling the shares to our supporters.

"Unless that is achieved, again we will be in the position where it is difficult to meet certain payments from time to time."

And the remaining players have agreed to salary deferrals this season in a bid to ease the club's financial burden.

But the Tynecastle club have struggled for form, sitting ninth in the Scottish Premier League and dropping out of the Scottish Cup after defeat to city rivals Hibernian on Sunday, although the men in maroon will take on Inverness next month for a place in the League Cup final.

"We are doing everything we can to bring in as much revenue as possible," continued Fedotovas.

"Results this season show that the team needs attention and we need to strengthen that aspect of our business.

"But if we are short, if we don't reach the magic number, it will be enormously difficult to find additional revenue to bring new players to the club and we will need to address our cost base."