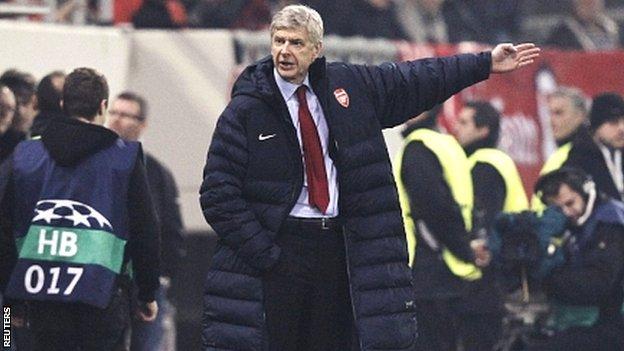 Victory would have seen the Gunners qualify for the last 16 as Group B winners, but they came second and could now face the likes of Barcelona.

"We have to wait for the draw but we wanted to be first," said Wenger. "We need a good Christmas present."

The draw takes place on 20 December with the first leg in February.

"The best team, by some distance, won tonight. Olympiakos out-passed this Arsenal side. Don't kid yourself: this was 2-1 going on 3-1 or 4-1. Arsenal's front four or six gave very little indeed. Arsene Wenger cut a frustrated figure and for most of the second half busied himself arguing with the officials on the touchline."

Midfielder Tomas Rosicky put Arsenal ahead and with group leaders Schalke drawing at Montpellier, Wenger's men were set to top their group.

But Olympiakos hit back through Giannis Maniatis and Kostas Mitroglou to ensure the Gunners finished as runners-up.

"We can get a bad draw or less strong team, but you normally get strong teams through anyway now," added Wenger.

Arsenal were angry with the decision to award a corner in the build-up to the equaliser, when Paulo Machado's header appeared to hit the post rather than Wojciech Szczesny's hand.

"It was so obvious that nobody touched the ball," Wenger protested. "You wonder how the fifth referee could not have seen it."

Arsenal have now won just four of their last 13 matches in all competitions and host West Brom on Saturday in the Premier League, where the Gunners sit 10th with only 21 points from 15 games.

Asked whether he planned to make signings in the upcoming transfer window, Wenger added: "We will see where we stand on 1 January.

"If everybody is fit we have a strong squad, but in certain areas we are a bit short because we cannot rotate.

"For now it is important for us to focus on the domestic championship, forget about the Champions League a little bit and get ourselves back in decent form," said Wenger.