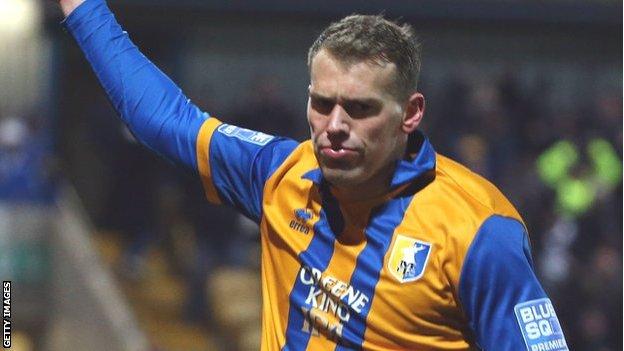 Paul Cox's Stags went in front thanks to an early own goal from Imps keeper Paul Farman.

But Anthony Howell fed Briscoe to fire home from 12 yards on 77 minutes to set up a lucrative home clash with the seven-times Cup winners on 6 January.

An inflatable cover, under which hot air was blown onto the playing surface, ensured that the game went ahead as scheduled at Field Mill.

John Dempster's header from Chris Clements' free-kick looped over Farman before hitting the base of the post and deflecting back into the net off the Lincoln keeper's shin.

Former Mansfield manager David Holdsworth had rested eight of his players for Saturday's 4-2 Blue Square Bet Premier win at Dartford in the hope of keeping them fresh.

But it was Mansfield who lasted the pace better and, with the tie just 13 minutes away from extra time, Howell's square ball across the box set up the bustling Briscoe to blast the winner.

"It's just out of this world, it's quite a surreal moment. At 1-1, especially in the first half I thought Lincoln were the better side but we made a couple of changes and it tipped in our favour.

"It's just a great strike from Louis Briscoe that's taken us through, so out of this world. I thought the lads were excellent and the support was absolutely immense."

"I'm really disappointed for the players and our supporters. We've been the better side for the majority of the game. They had the first half-hour when we were a little nice at times but after that there was only one team in it.

"I'm pleased for Adam Smith, who scored his first goal for the club, but half-time really came too soon because we were fully in control of the game. We asked for more of the same at half-time and we got that, the chances came along and we've been punished for not taking them.

"We've given our all and done everything we can to try and be victorious but sadly it wasn't to be tonight. We've got to get the players' heads back up and have that fighting spirit again.

"We've got character, honesty, integrity and desire and I'm proud of them. Not one of them's given anything other than 100% and that's all we can ask."