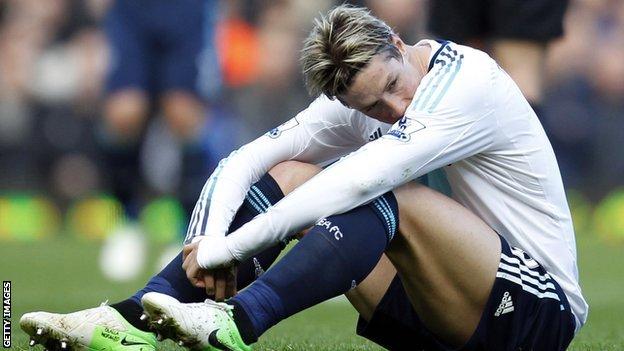 Former Chelsea striker Jimmy Floyd Hasselbaink believes Fernando Torres needs to ask himself if he is doing enough to end his poor run.

Torres, 28, has scored only once in his last 11 games and has failed to sparkle since his 2011 move from Liverpool.

Asked whether there was too much pressure on Torres, rather than his team-mates, Hasselbaink said: "I think you have to look at yourself first.

"Ask 'am I doing everything possible to score goals?' and then go from there."

Hasselbaink told BBC Radio 5 live: "There comes a stage when you have to take responsibility for your own future."

Torres moved to Stamford Bridge in January 2011 for £50m but has struggled to recapture the form that made him one of the Premier League's most prolific front men.

The Chelsea striker scored 56 goals in 79 appearances under Rafael Benitez while at Liverpool but has only managed 20 goals under five managers since the Spanish boss left Anfield.

After claiming the FA Cup and Champions League last term, Torres started this campaign well with six goals in his 12 opening appearances.

But goals have since dried up, with only one more added to his tally since. And his poor run has corresponded with the Blues' bad form.

Chelsea have fallen 10 points behind Premier League leaders Manchester United after a run of seven games without a win.

Benitez replaced former boss Roberto Di Matteo as manager four league games into that run and has yet to taste victory in his opening three games.

Hasselbaink, who scored 88 goals during his four-year spell at Stamford Bridge, thinks other players will have to chip in with goals to help relieve the pressure on Torres and Benitez.

"I think Benitez needs goals from everywhere - not only from Fernando," he said.

"A lot of people are looking to Fernando for goals and yes, he needs to bring his share.

"When you are in a successful team you have goals coming from everywhere, not just your striker."