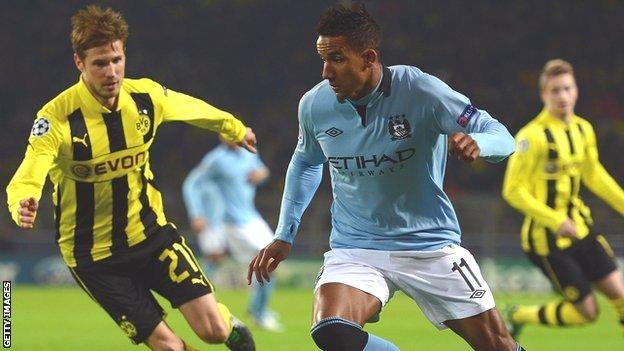 Scott Sinclair is prepared to wait for his chance at Manchester City, having struggled for first-team football since his move from Swansea in August.

Roberto Mancini handed the 23-year-old winger only his third start for City in their 1-0 Champions League defeat against Borussia Dortmund on Tuesday.

"I knew when I came to City that it was going to be a patient waiting game for myself," he told BBC Radio Manchester.

"When I do get the chances, I've got to go out there and show what I can do."

on the final day of the transfer window.

He began the Premier League games against Stoke and Arsenal in September, but then had failed to appear in the starting line-up until Tuesday's loss in Germany.

condemned the English champions to the bottom of their Champions League group and confirmed in the new year.

The former Chelsea youngster said City's European exit is a disappointment and believes that will only make the squad more determined to retain their Premier League crown.

"All the players have a winning mentality. Every game we play, we want to win," added Sinclair.

"We're all disappointed but we've got to move on and concentrate on the Premier League."

City remain unbeaten in the league this season, but lie second in the table, three points behind leaders Manchester United.

The two title contenders meet in the first Manchester derby of the season at the Etihad Stadium on Sunday.

He made two substitute appearances in the League Cup last season, as well as playing eight times in the Championship during a loan spell with Portsmouth.