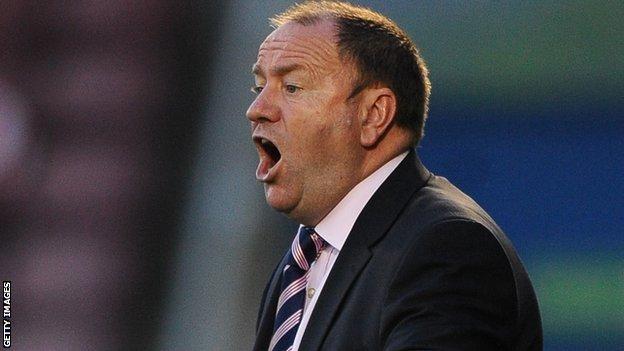 Manager Gary Johnson says his Yeovil players still need to improve despite progressing to the Johnstone's Paint Trophy area semi-finals for the first time in their history.

Goals from Ed Upson and Sam Foley gave them a 2-0 win over 10-man Wycombe Wanderers on Tuesday.

But Johnson told BBC Somerset: "Some of the lads in that dressing room deserve to be there, but one or two don't.

"A couple of the lads haven't got what we are after at the moment."

Wycombe were a man down for an hour following Matt Spring's sending off and the Glovers appeared to be in control with a two-goal cushion before half-time.

"In time, when I write my book, you'll get to know what I really felt about the last 20 minutes.

But the Chairboys fought their way back into the game and forced keeper Marek Stech to make a number of saves.

Johnson continued: "We looked like we fancied it at the start and got a couple of good goals but we've got to see out the games.

"If you look at the stats we probably had 30 opportunities and I'd like to see us take more of those. It didn't make for a great atmosphere at the end of the game.

"The game petered out. The crowd did their best to give it the 'oles'. Three or four 'oles' are OK but then you need an end product.

"In time, when I write my book, you'll get to know what I really felt about the last 20 minutes.

"But we're through and that's the positive."

The draw for the next round will be made on Saturday and Yeovil could face Oxford, Southend, Leyton Orient or Northampton - Johnson's former club.