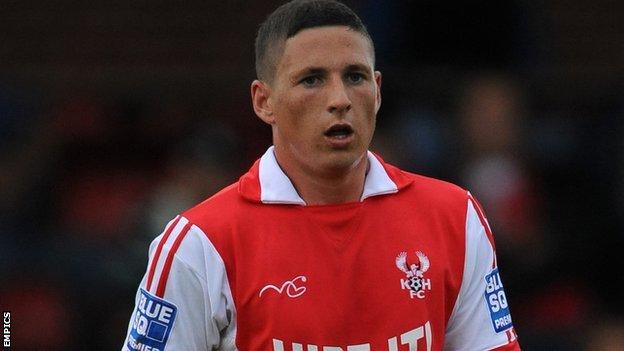 After a sorry start that saw them lose five on the spin, Steve Burr's men have now lost just once in 16 league games.

And the four straight wins that have lifted them to eighth have all been earned by late goals, Ryan Rowe's at Tamworth on Tuesday being the latest.

"We were always playing catch-up after that but, having got this far, we still think there's more to come."

Harriers ability to land crucial goals late on is a big part of their change in fortunes.

Kidderminster have now scored in the 89th minute or later in all their last four matches and seven of this season's 26 league goals have come in the last three minutes of play.

In addition eight of Ryan Rowe's 12 goals for the club have now come off the bench - of which five have come in the last minute.

Last season Steve Burr's men fought back from losing positions to pick up points 13 times, hitting 10 goals in injury time, of which seven of were equalisers or winners. Of the 34 league goals they hit from the turn of the year, 16 came in the last 10 minutes.

Saturday's home date with leaders Newport County could be the biggest test yet of Harriers' promotion credentials now that they have moved to within four points of the play-off zone.

But Whild leaves little room for doubt about the level of the Harriers' ambitions.

"We're still not happy," he said. "We've had two seasons finishing just outside the play-offs, but eighth is still not good enough."

Harries will be further boosted by the availability of Callum Gittins and Keith Briggs after suspension for Saturday's game.

But, having witnessed Ricky Shakes come off the bench to set up Ryan Rowe's 90th minute winner to earn Harriers' first win at The Lamb since 1979, Whild is keen to emphasise the spirit and strength of their entire squad.

"Ryan's come off the bench again and, like the typical goalscorer he is, he's finished it off," Whild added.

"That's nine for the season now but he can't do any more than he's doing every time we're calling on him. That's what we got him in to do and his goals have been very valuable."