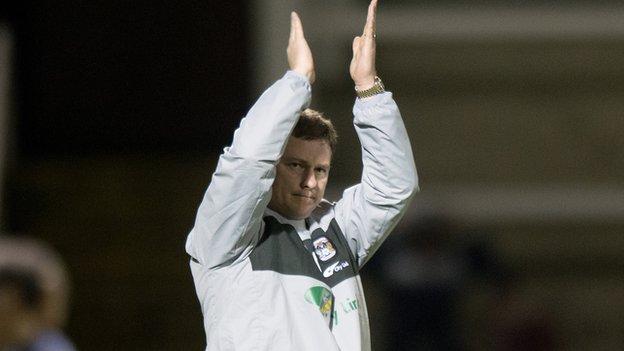 Coventry City manager Mark Robins was relieved to see his side through to the Johnstone's Paint Trophy northern semi-finals after the drama of a penalties shootout win over Sheffield United.

The Sky Blues looked set to wrap up the tie in regulation time when Harry Maguire turned Steven Jennings' cross into his own net on 56 minutes.

But, after David McAllister's late strike, the hosts won 4-1 on penalties.

"I'm delighted to get though. It keeps our unbeaten run going," said Robins.

"We came up against a side who set their stall out to be difficult to break down.

"That made it hard for us to play any expansive stuff.

"And there wasn't that much drama in the 90 minutes.

"But we did it in a good way in the end as the fans got to see the drama of a penalty shootout," he told BBC Coventry & Warwickshire.

Maguire and Ryan Flynn both missed from the spot for the Blades.

But Coventry converted all of their four penalties, Gary McSheffrey, David McGoldrick and Carl Baker all hitting the back of the net before John Fleck fired the Sky Blues into the northern section semis in front of a healthy 10,162 crowd.

"It feels great," added Robins. "It keeps the run going and you could see at the end what it means to the supporters."

The Sky Blues, who have also booked their place in the third round of the FA Cup (and a repeat of the 1987 FA Cup final against Tottenham Hotspur on 5 January), are now unbeaten in five matches.

And they are up to 15th in League One, within 10 points of the play-off zone, going into this Saturday's Midlands derby with Walsall (8 December, 15:00 GMT).