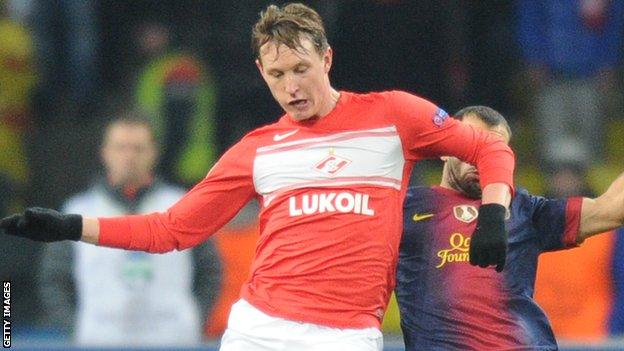 Sitting bottom of Group G, Spartak unlike their opponents, have no chance of booking their place in the last 16.

"For us, even though we cannot go through, it is a big game, it is a Champions League game," midfielder Kallstrom said.

"We have a lot of things to prove to each other and also to the fans."

Bottom of Group G with three points, their recent poor domestic form continued with a 4-2 defeat by Zenit.

"We didn't play badly but we lost four goals which makes it impossible to win a football game," he said.

"We are working hard on our problems, we have acknowledged that we can't lose so many goals and so hopefully tomorrow we can get a clean sheet and that would make it easier for us to win."

Sweden international Kallstrom was part of the Lyon side that pipped Rangers to the knockout stages in 2007.

"I remember the game at Ibrox, we had to win with Lyon and it was a great night," said Kallstrom.

"It was one of my favourite games in the Champions League. The atmosphere at Ibrox was fantastic and I think it will be even better (at Celtic Park).

"We will not take it easy in this game."