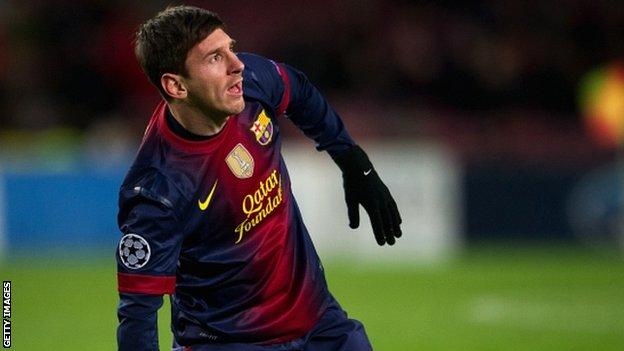 Barcelona's Lionel Messi has escaped serious injury after being carried off on a stretcher during Wednesday's Champions League draw with Benfica.

Messi hurt his left knee in a collision and was taken off 30 minutes after coming on as a second-half substitute.

But tests revealed nothing worse than bruising and he was able to train in the Barca gym on Thursday morning.

"I sincerely thought it was the last ball I'd touch for a long time because of the pain," the 25-year-old said.

Having already been guaranteed to go through as group winners, Barca left their prize asset on the bench at the Nou Camp.

The Argentina international has scored 84 goals in 2012 and is chasing Gerd Mueller's record of 85 in a calendar year which he set while playing for Bayern Munich and West Germany in 1972.

Messi is not expected to play in Sunday's match at Real Betis, but Barcelona have La Liga games against Atletico Madrid and Real Valladolid, and a Copa del Rey tie with Cordoba in December for him to attempt to break the record.

Benfica knew a win would see them finish second behind Barca, but the Portuguese side missed several early chances and the 0-0 draw plus Celtic's win over Spartak Moscow saw the Scottish champions qualify instead.

The Turkish side, who trailed to Mossoro's first-half goal, levelled through Burak Yilmaz's header and triumphed when Aydin Yilmaz tapped home after Quim failed to hold on to a shot.

That meant they finished above Cluj on the head-to-head rule, leaving the Romanian side to settle for a Europa League spot.

Juventus edged a tight game against Shakhtar Donetsk to join the Ukrainians in qualifying from Group E.

The Italian side, who needed a point to finish above Chelsea, scored the only goal of the game when Stephan Lichtsteiner's cross went in off Shakhtar defender Olexander Kucher.

Juventus go through as group winners, while Donetsk finish second above the Blues because of their head-to-head record - they scored more goals at Stamford Bridge than the London club managed at the Donbass Arena.

Bayern Munich and Valencia were already sure of their progress from Group F before the final round of matches and both teams rounded off their group campaign with wins.

The German side thrashed BATE Borisov 4-1 to ensure they went through as group winners, while Valencia beat Lille 1-0 in France. BATE already knew they would finish third.