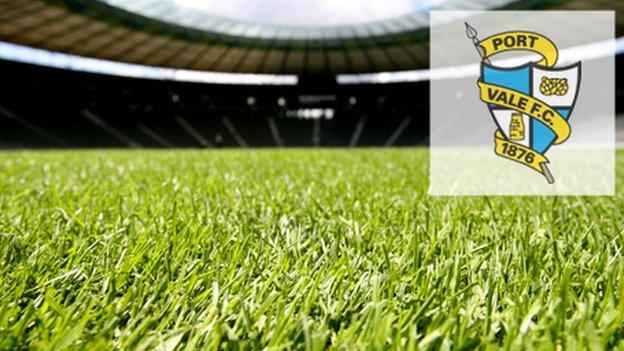 Calvin Andrew and Sean McAllister both made their full debut, while Liam Chilvers was called on for the first time since returning to Vale from AFC Telford United last month.

It was a bit of a damp squib. We've gone out in a fashion that doesn't please me

"The minutes they've had will help them," Adams told BBC Radio Stoke.

"But all three you can tell have lacked first-team football."

After being hit by two goals inside the first 10 minutes of the second half, Vale - badly weakened by suspensions to defender Richard Duffy midfielder Ryan Burge and 20-goal leading marksman Tom Pope - exited the JPT 2-0 to Bradford City.

Adams admitted: "Hopefully they'll all look a bit better on another occasion.

"We'd got the suspensions but we had enough people with first-team experience to come in and cope comfortably and we've just not performed.

"It was a bit of a damp squib. We were poor individually and collectively and we've gone out in a fashion that doesn't please me.

"It's given me more questions than answers."

Promotion-chasing Vale, second in League Two, can go top on Saturday if they win at home to Chesterfield and leaders Gillingham fail to win at fourth-placed Rotherham.