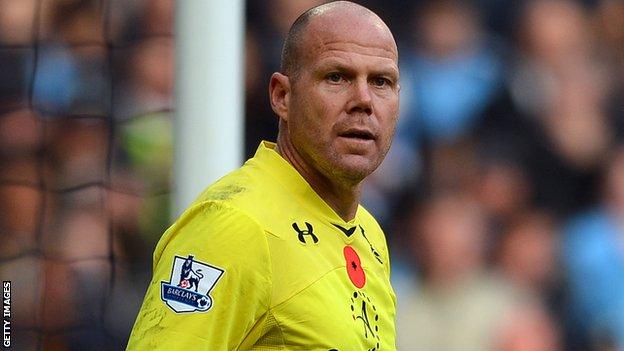 Tottenham manager Andre Villas-Boas has made it clear he wants to keep Brad Friedel at White Hart Lane.

The 41-year-old keeper has been linked with a move to former club Blackburn, although their boss Henning Berg described that as "speculation".

Friedel remains part of Villas-Boas's plans despite being displaced as first choice by Hugo Lloris.

"We are trying to hold on to our best assets and Brad is certainly one of them," the Tottenham manager said.

Brad has been excellent. I spoke to him and he has been such an important player for us

Friedel is set to make his first Tottenham appearance for almost a month when they face Panathinaikos in the Europa League on Thursday.

Lloris has featured in the club's last five games, but Villas-Boas intends to rest a number of players for the final match in Group J.

"Brad has been excellent," Villas-Boas said. "I spoke to him and he has been such an important player for us. Rotation has not been because of performances.

"Both goalkeepers' performances have been excellent. It gives me the ability at any time to throw a different keeper into the game."

Asked about Blackburn's reported interest, Villas-Boas said: "I don't know anything about it."

The Panathinaikos match has come too soon for long-term injury victims Scott Parker and Benoit Assou-Ekotto, but they could return for the Premier League game against Swansea on 16 December.

"They have both been out for some time but we have to be sensible with the situation," Villas-Boas added. "Parker is an amazing player and it is a big boost for us."

Tottenham will go through to the Europa League knockout stages if they avoid defeat at home to Panathinaikos.

Villas-Boas has plenty of affection for a competition he won with Porto in 2010, and is unhappy with Uefa plans to scrap the tournament and replace it with an enlarged Champions League.

"It's difficult for me [to accept]," he said. "Most clubs are in a difficult financial situation. Increasing the Champions League means you have to remove the name 'Champions' out of it as it would not make any sense.