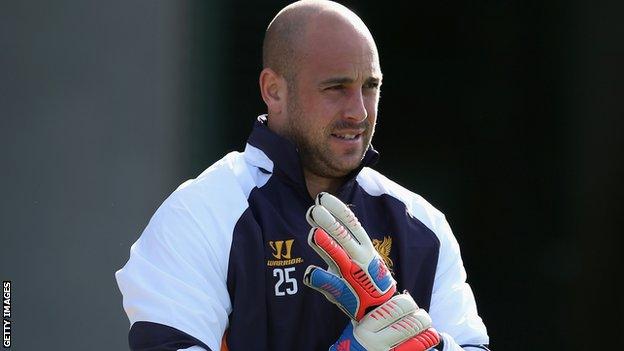 "I don't like to talk about speculation as I know in my time at Liverpool the names we have been linked with has been incredible," Rodgers said.

Pepe Reina is clearly our number one goalkeeper, one of the best goalkeepers in the league

Backing Reina, 30, he added: "But what is worth putting on record is that I'm not looking for another goalkeeper."

He added: "We have been linked with lots of goalkeepers. I have two very good goalkeepers - Pepe Reina and Brad Jones, who is a very loyal and capable number two.

"Any areas we look to improve will be elsewhere."

Rodgers acknowledged that Reina has had a "difficult couple of years" as he has struggled for form.

The keeper suffered a hamstring injury in October that kept him out for a month, but regained his place from Jones went he returned to fitness.

"Pepe Reina is clearly our number one goalkeeper, one of the best goalkeepers in the league," Rodgers said.

"He had a difficult couple of years but for me his best years are ahead of him and his commitment to the cause and what we are trying to achieve is 150%.

"Pepe has taken on board himself to do a lot of work to get in the best possible state he can be in physically and mentally and I am so happy with him.

"He is a great man and has been a wonderful player for me in this short period of time, on and off the field.

"I can see him starting to get back to the level he set here, which was a really high standard, and hopefully that continues."

Reina is expected to start in Liverpool's final Europa League Group A match against already-eliminated Udinese at the Stadio Friuli on Thursday.

Liverpool will reach the knockout stages with a win, and will be eliminated with a defeat.

But they will go through with a draw if Swiss side Young Boys fail to beat Russian opponents Anzhi Makhachkala.

"It is a competition we all want to do well in and we've never felt at any moment that we want to be out of it," said Rodgers.