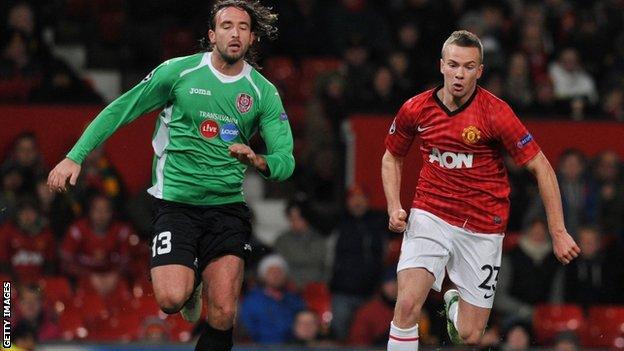 Manchester United midfielder Tom Cleverley is a doubt for Sunday's Manchester derby after limping out of Wednesday's Champions League defeat by CFR Cluj with a calf problem.

Sir Alex Ferguson fears the injury will keep the 23-year-old England international out of the eagerly anticipated trip to Etihad Stadium.

"We will assess Tom in the morning." Ferguson said. "He felt his calf a little but it is not good news.

The Manchester United manager rested 10 players from Sunday's 4-3 victory over Reading, with Wayne Rooney the only survivor from that side. Rooney came through unscathed on a night of frustration at Old Trafford.

Ferguson was asked whether it was important to rest players ahead of the match between the Premier League's two top sides.

"Yes absolutely, no doubt about that," he responded.

The Scot selected a number of young players but, despite the defeat, felt the experience would benefit the club in the long term.

"It was a wonder goal that beat us," Ferguson added. "We didn't deserve that - we created some good chances but when you lose a goal like that you can have no complaints.

"We had a young side out and I felt we did very well at times. The pitch was a bit dead from the frost but I am satisfied we put a good performance in. Our young players will get a lot of experience from that."

United qualified as winners of Group H with two matches to spare but Ferguson is wary of a number of strong second-placed sides in the next round.

"We have won the group but we know the likes of Shakhtar, Milan, Porto - all the big names - are in there," he said. "We qualified comfortably but the real tournament starts at the end of February. The knockout stages are fantastic."