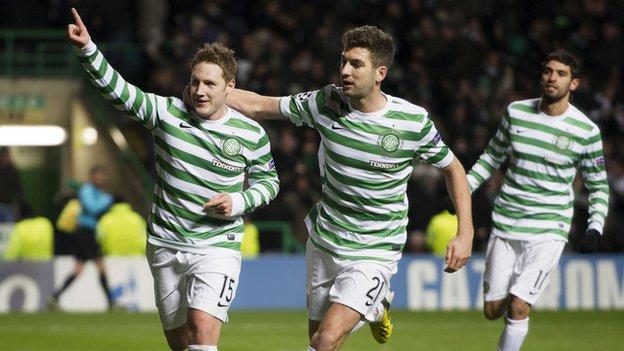 Manager Neil Lennon said his Celtic players overcame their doubters as well as Spartak Moscow after a tense 2-1 win over the Russians took them into the last 16 of the Champions League.

"I'm very proud of the players," he said. "They have performed a miracle.

"People laughed at me when I said that my target was to qualify.

"No-one gave us a prayer going into this group, but we have qualified and deservedly so. I think you could see the players progressing last year."

Celtic were drawn in a group alongside Benfica and Barcelona, winners of six European Cup titles between them, and a Spartak Moscow side that has spent more than £35m over the past two seasons strengthening their squad.

Barca had already secured top spot in Group G ahead of Wednesday's final round of matches, leaving Celtic needing to better Benfica's result at the Nou Camp to progress.

Gary Hooper opened the scoring for Lennon's side in the 21st minute, but that was cancelled out by Ari before the break.

Celtic were then given a penalty kick in the 80th minute for Marek Suchy's barge on Georgios Samaras and up stepped Kris Commons to slam the ball in off the crossbar, while Benfica could only manage a 0-0 draw.

"It means the world to me," enthused Lennon on the achievement of reaching the knockout phase.

"It's a privilege to manage this club, but it's not easy at times. There is a great expectation on you and getting into this group was vitally important for myself, to see where we could go.

"It's nice to have on your record.

"But I've got a long way to go to emulate him and Martin [O'Neill], who had a huge influence on my career. The two of them have been great role models for me."

Celtic failed to progress beyond the first match on either of their previous appearances in the Champions League knock-out stages, losing to AC Milan and Barcelona under Strachan.

Reflecting on a fraught evening against a lively Spartak side, Lennon added: "We didn't play anywhere near the way we can in the first-half, but we had control in the second-half and deserved to win the game.

"We got the break with the penalty, but we created good chances.

2007-08: Celtic lose to Barcelona in first knock-out round

"I didn't want them to be the team just remembered for beating Barcelona.

"They've beaten Barcelona and they have reached the last 16 and that is fantastic."

Lennon then revealed that he had not seen Commons take the penalty.

"I've seen the last couple and we've missed them. I just thought I'll wait for the roar to go up.

"Kris showed great mental strength to take it. I'm sure he was aware of the significance.

"It epitomised his night. I thought he had a fantastic game."

Commons was stretchered off following Kim Kallstrom's tackle, the Spartak man following him from the field after his second booking.

The Celtic midfielder tweeted a picture of his injured leg following the game.

Celtic could face Manchester United, Malaga, Juventus, Bayern Munich, Borussia Dortmund, Schalke or PSG in the next stage of the tournament.

The Bhoys will find out their opponents in the draw at Uefa's headquarters in Nyon, Switzerland on Thursday 20 December.

And Lennon joked: "I would take Malaga - it would be nice this time of the year over there.

"Seriously, it is going to be really tough, against the top teams in the groups.

"You just don't know what shape teams are going to be in two or three months' time.

"But we are there, we are going to enjoy it and we want to progress as far as we can in the competition.

"The spirit is fantastic and we have some quality players.

"They have put everything into the group and they have grown as the campaign has gone on and some have enhanced their reputations no end."