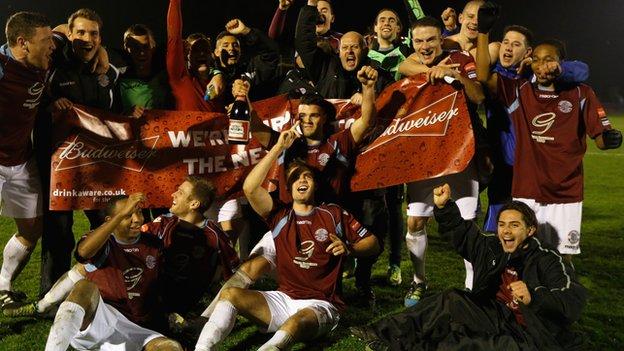 The Isthmian League Premier side went ahead through Lee Carey's penalty after Matt Bloomer had fouled Zac Attwood.

Harrogate had to wait until the 89th minute to level as Tom Platt bundled the ball in from Dave Merris's cross.

The two sides could not be separated after five penalties each and, after Lee Elam missed for Harrogate in sudden death, Okojie won it for Hastings.

The in the original game with Jamie Crellin's second-half goal earning a replay for Hastings.

The hosts - the lowest-ranked team left in the competition - went ahead through Carey's spot-kick.

Both sides scored four of the initial five penalties, but Okojie kept his nerve to ensure a money-spinning third-round tie for the Isthmian League Premier minnows.