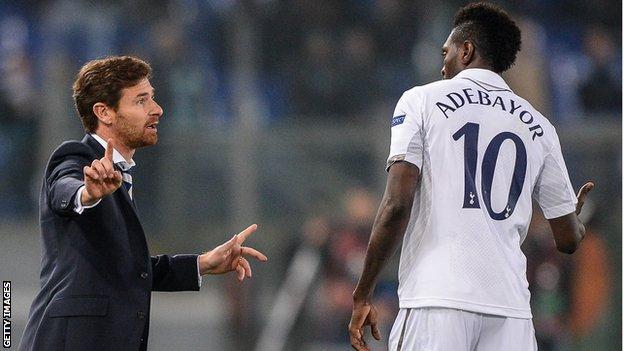 Tottenham Hotspur manager Andre Villas-Boas is very happy that Togo's Emmanuel Adebayor will not be going to January's Africa Cup of Nations.

The Togo captain is involved in a row with his country's football federation over match bonuses.

"At the moment we benefit from that situation," Villas-Boas said.

"We'll probably have the player here in January, which is a massive boost as you know, it gives me other options and possibilities.

"[He is] very very important, we are speaking about a player that has meant so much to us."

He also recognised that it had not been an easy choice for Adebayor.

"We can't think only of ourselves, it's also an important competition for the player and for his country," he added.

"It's his own individual stance regarding this situation."

Togo are at the Nations Cup for the first time since withdrawing from the 2010 tournament in Angola after a terrorist attack on their team bus.

Adebayor retired from the national team after that attack but agreed to return last year and helped the Hawks qualify for South Africa 2013.

Togo begin their Group C campaign against Ivory Coast on 22 January before taking on Algeria and Tunisia.