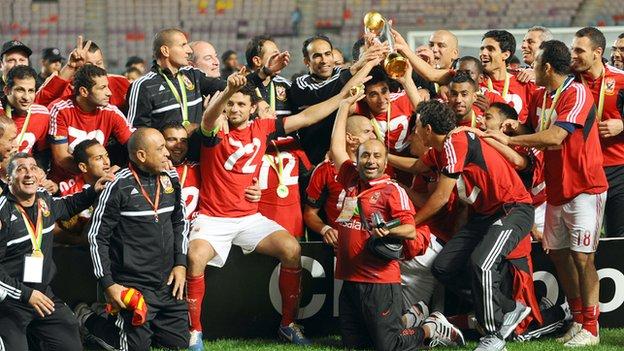 Seven-time African champions Al Ahly of Egypt will face Japanese side Sanfrecce Hiroshima in the quarter-finals of the Club World Cup on Sunday.

The winners of the Japanese league beat the Oceania champions Auckland City from New Zealand 1-0.

The only goal of the game in the Japanese city of Yokohama was scored by Toshihiro Aoyama in the 66th minute.

Ahly, competing at their fourth Club World Cup, are hoping to improve on their third-placed finish in 2006.

If they beat Hiroshima, on Sunday they will play Copa Libertadores winners Corinthians of Brazil in the semi-finals next Wednesday.

Despite the pedigree of Corinthians, Al Ahly board member Khaled Mortagey insist his side can be a match for anyone.

"In football we can beat anyone - we beat Real Madrid in Egypt in 2001," he told BBC Sport.

"If we play our game and play with the same spirit and technique we did in the [African Champions League] final against Esperance of Tunisia, I think we can do something.

"There's a lot of hopes among the fans and the Egyptian people that we can up with a better position than we did in 2006."

Ahly claimed their record seventh title by beating Esperance 2-1 in Tunis in the second leg of the final, after the first leg had ended 1-1.

Mortagey said the club desperately needs the prize money from the tournament to help make up for the loss in revenue caused by the continued lack of league football in Egypt.

There league ended in February when at least 72 fans died in Port Said during violent clashes between supporters of Al Ahly and Al Masry.

"We need to do our best and not spare any effort for a better position - each one is another half a million dollars," he added.

"It's a difficult tournament but we are a professional club and need to be 100 per cent prepared for this Club World Cup."

The total prize fund for the tournament is US$16.5 million, with US$5 million for the overall winners and US$500,000 for the seventh-placed side.