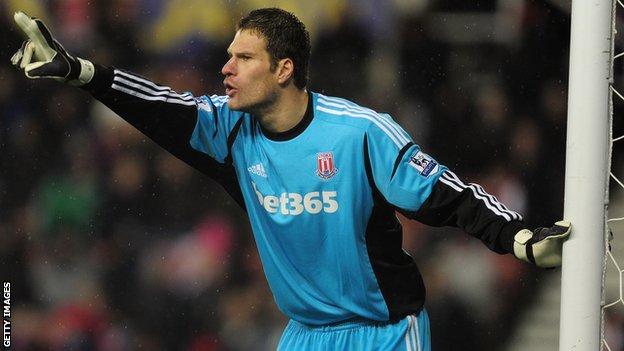 Stoke boss Tony Pulis says the club have no intention of selling goalkeeper Asmir Begovic or any other key players in the January transfer window.

Manchester United and Liverpool and reported to be among a number of clubs interested in the Bosnia-Hercegovina international.

"We will not be selling any of our better players in the January window, and that is full stop," said Pulis.

Begovic was quoted earlier this week as saying he is happy to stay at Stoke.

The 25-year-old has played in all of the Potters' 15 Premier League games this season and has conceded only 15 goals, keeping seven clean sheets.

Pulis was speaking about his determination to keep his squad together as he prepares for the trip to Aston Villa on Saturday.

"If a big club comes in for any of our players, then it is very difficult to say 'no, we are not going to do it'," admitted Pulis.

"You hope you get interest because it shows the player is playing really well. But there will be no sales.

"We will be looking to bring one or two in, though."

Begovic, who joined Stoke from Portsmouth for £3.25m two years ago, has played down speculation over a possible move.

"I am happy here so there are no issues with that," he said earlier this week. "As far as I know it's all speculation.

"I have three and a half years on my contract and I am concentrating on playing and staying in the team and trying to help the team be successful.