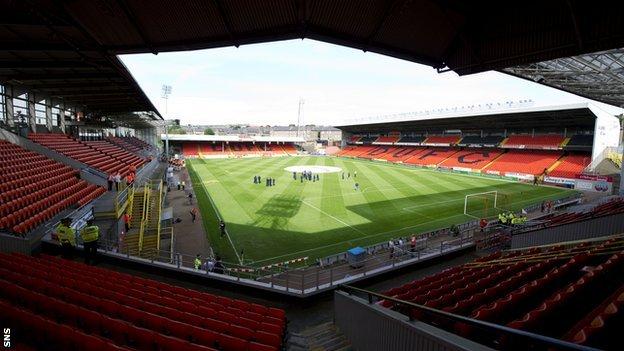 Rangers have knocked back an appeal by Dundee United to reject their share of ticket revenue from the club's fifth-round Scottish Cup tie at Tannadice.

as "feelings remain very raw" about the Tayside outfit.

Under Scottish Cup rules, the ticket money, after the deduction of expenses, should be shared evenly between clubs.

But Rangers say they plan to take their cut from United and give it to charity.

The game in early February is to be screened live on Sky and Rangers will keep their share of that because the conflict with United focuses on the ticket issue.

Charles Green, the chief executive at Ibrox, said: "The club was contacted by Dundee United requesting us to waive our rights to the share of the gate under Cup Competition Rule 46(c), this was declined.

"It has been decided by the board that any proceeds from gate receipts due to the club will be donated to the Prince and Princess of Wales Hospice Brick by Brick Appeal and Erskine charities via the Rangers Charity Foundation."

The Scottish Football Association is due 5% of the revenue from ticket sales from Scottish Cup matches.

Thereafter, the host club is entitled to deduct 20% to cover expenses, with the remainder split 50-50.

Some of the club's fans have pinpointed Dundee United chairman Stephen Thompson as being one of the most vociferous opponents of relaunched Rangers being admitted to the SPL in the summer.

And their anger stems too from Thompson's refusal to honour Rangers fans' ticket stubs for a rearranged game after a match at Tannadice in November 2009 had been abandoned at half-time because of a waterlogged pitch.

Green said on Tuesday: "Everyone at this club is dismayed at the actions of certain SPL clubs, which were actively engaged in trying to harm Rangers when we were in a perilous situation and we are acutely aware of their attitude to us."

United responded by saying they did not intend "to enter into a war of words with Rangers or to dignify their position by responding in kind".

However, the Tayside club's fans were more outspoken.

ArabTRUST and The Federation of Dundee United Supporters Clubs said they were "disappointed" at Rangers' stance, and added: "It's sad that some parties choose to refer to past alleged indiscretions against their club as an excuse to not attend the match."