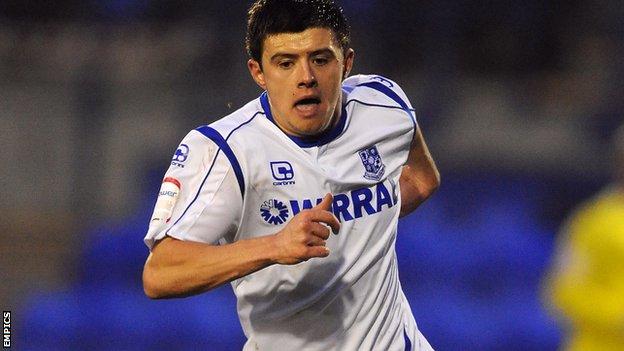 Full-back Aaron Cresswell believes Ipswich are starting to reap the benefit of the defensive knowhow of manager Mick McCarthy and his coaches.

They were beaten 5-0 by Crystal Palace and 6-0 by Leicester in two of McCarthy's early matches in charge.

Town have not achieved a clean sheet in their last three games, but have picked up seven points out of nine.

Cresswell told BBC Radio Suffolk: "Now we've got a steady back four, we're looking to keep it tight at the back."

McCarthy was a respected centre-back during a playing career that took him from Barnsley to Manchester City, Celtic, French club Lyon and Millwall and also brought him 57 caps for the Republic of Ireland.

"Him and TC [coach Terry Connor] have got bags of experience. They've been around and had great careers, so it's nice for them to pass it on to us," said Cresswell.

Ipswich's recent form has lifted them out of the bottom three in the Championship and into 20th place.

Cresswell said confidence was now high in the camp but looking back on the two thrashings which followed McCarthy's appointment to replace Paul Jewell, he continued: "You'd like to think that's gone now.

"We've got to put that behind us and just keep looking forward to the next game, and the next game after that."

The Liverpudlian admitted his own form had been poor at the start of the season, but insisted that had nothing to do with summer speculation linking him with Aston Villa.

"Everyone said 'has his head been turned, he may not want to be here' and stuff like that, but that was never the case," Creswell continued.

"It just wasn't happening (for us), the whole team wasn't playing well and the confidence was low. That's all it most probably was."