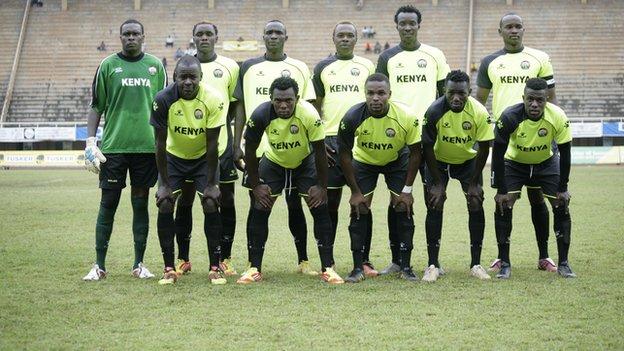 Kenya edged past Zanzibar on penalties to reach the final of the Cecafa Senior Challenge Cup in Uganda.

The Harambee Stars twice came from behind to earn a 2-2 draw and force the game into extra time, which failed to produce a winning goal.

Khamis Mcha Khamis gave Zanzibar the lead in the 21st minute before an own goal by defender Nadir Haroub made it 1-1 at half-time.

Zanzibar regained the lead through Aggrey Morris in the 76th minute, but it lasted just four minutes as Mike Baraza scored Kenya's equaliser.

Both sides finished the game with 10 men as Zanzibar's Ahmed Adeyom was shown a second yellow card for a foul on substitute Victor Ochieng, who was unable to continue due to the resulting injury.

There was to be no repeat of their quarter-final penalty success for Zanzibar as they failed to score twice, while Mike Baraza, Joackins Atudo, Edwin Lavatsa and Abdalla Juma all converted for Kenya.

"This is a very sweet win because we are back to a Cecafa final," Kenya's stand in coach for the tournament, James Nandwa, told BBC Sport.

Two goals from Robert Ssentong and one from Emmanuel Okwi carried the day for the Cranes and set up an intriguing finale to the 2012 tournament.

Saturday's decider will be a repeat of the 2008 final when Uganda beat their arch rivals 1-0.

Zanzibar will take on Tanzania in the third place play off.