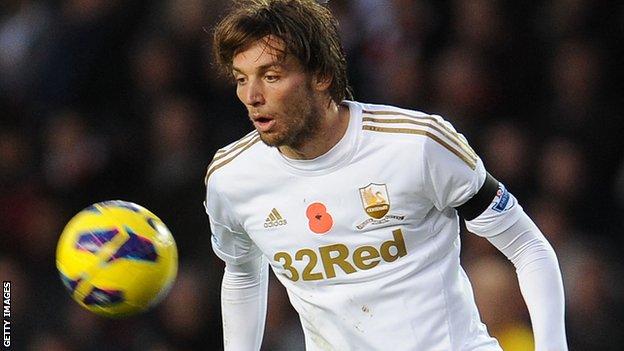 Manager Michael Laudrup has insisted striker Michu will be staying at Swansea City and believes few clubs would be able to afford him.

Michu has won many admirers by scoring 10 goals in 15 Premier League games since joining Swansea from Rayo Vallecano in July.

Laudrup suggested the Spaniard would cost a lot more than the £15m Liverpool paid for Joe Allen in the summer.

"Obviously the offer can be so big that you have to accept it.

"But I really don't think that they're going to pay so much money for him.

"We know what Liverpool paid for Joe Allen. Joe went to Liverpool and you know more or less what they paid for him.

"If they have to pay double for Michu there are few clubs who could afford that.

"A guy who scores many goals must be worth more so you make the figures.

"I don't think anyone will come with that money to be honest. He will stay."

Swansea chairman Huw Jenkins had previously stated the former Real Oviedo and Celta player would not be sold during the January, 2013 transfer window.

Michu scored twice in last Saturday's 2-0 win at Arsenal, Swansea's third in their last four games, which moved them up to seventh in the table.

Laudrup's side are just three points off third-placed Chelsea ahead of Saturday's home game against Norwich, who are unbeaten in eight games, and the Dane is eager to play down expectations.

"I am pleased with what we have now, but if we are sixth, eighth or 10th now it is not so important. We are 15 games in, there are 23 to go and it is still tight," Laudrup added.

"If you look at the teams above and below it is very tight and you know in three or four games the situation can change very quickly.

"So we need to take one game at a time and when we get to March or April then we can see what happens."