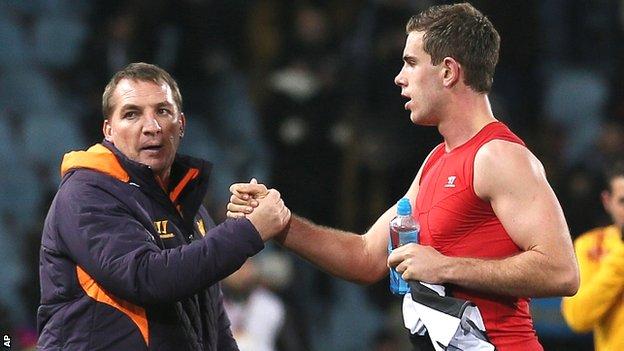 Liverpool manager Brendan Rodgers paid tribute to Jordan Henderson after the midfielder's goal secured his side a place in the Europa League last 32.

Henderson, 22, registered for the first time in European competition as the Reds to top Group A.

"He is a great lad, works hard and has come in over the last month and made a good contribution," said Rodgers.

"He has the quality to arrive in the box and a finish in him. His hard work is paying off. I'm delighted for him."

It was only Henderson's third strike since a £16m move from Sunderland in 2011 and he almost doubled the lead with a second-half volley that was tipped over the bar by Daniele Padelli.

"It was a very good finish and he was unfortunate not to get a second goal as the keeper made a wonderful save," Rodgers added.

Udinese had Giovanni Pasquale sent off towards the end of the match, but almost snatched a draw that would have knocked Liverpool out when Antonio Di Natale blasted over with the last kick of the match.

Victory for Young Boys over Anzhi Makhachkala in the group's other game meant the Reds had to win or they were out.

"It is that moment when there is literally 20 seconds left and we've given away the ball - it was very close," said Rodgers.

"Hopefully it is a sign we have a little bit of luck going our way because maybe a couple of months back that would have gone in and we would be out of the competition.

"There was no margin for error tonight. I felt we had to win the game because we were in a difficult group against good teams.

"Over the course of all the games, how we have played and progressed through the tournament, I think we are deserved winners of the group.

"We can rest well, focus on the league and look forward to next February."