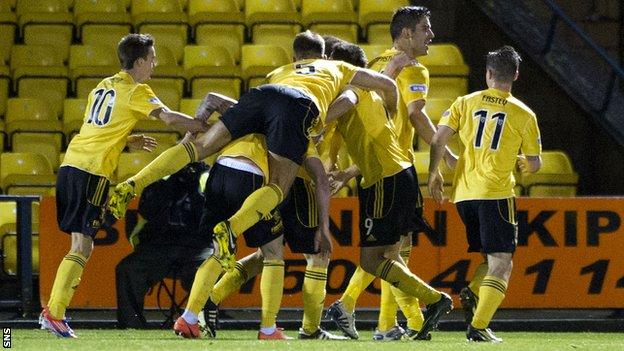 Dunfermline missed the chance to go top of the Scottish First Division after they were beaten by Livingston.

The visitors played 71 minutes with 10 men after Callum Morris was shown a straight red card for a foul on Stefan Scougall.

Marc McNulty hit the crossbar for Livingston in the 33rd minute before Burton O'Brien's header was saved by Michal Hrivnak.

Livingston took the lead in the 65th minute as Jesus Garcia Tena let fly from 30 yards and his shot nestled in the bottom left-hand corner of Hrivnak's goal.

Daniel Mullen appeared to make the game safe in the 90th minute with a placed shot across Hrivnak into the far corner of the net.

Deep into stoppage-time Craig Barr was dismissed after giving away a penalty for a foul on Ryan Wallace and Andrew Barrowman found the top corner from the spot, but it was too late for The Pars.