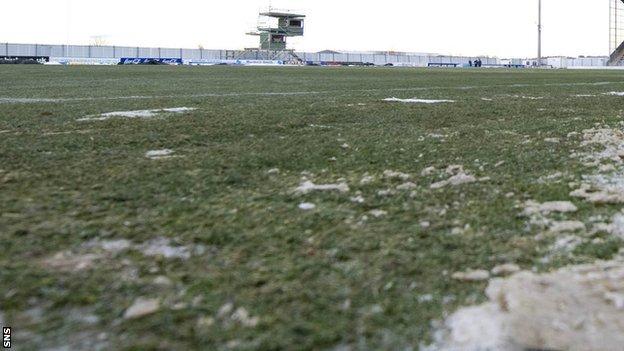 The cold weather has forced the postponement of eight Scottish Football League matches.

Airdrie v Falkirk, Cowdenbeath v Partick and Hamilton v Dumbarton in Division One were called off on Friday.

East Stirlingshire v Montrose and Alloa v Queen of the South were postponed on Saturday morning.

Alloa's Recreation Park failed a 12:00 GMT inspection, meaning their Second Division game against the leaders was called off. Queens are nine points ahead of the second-place Wasps.

Hamilton's league game is now scheduled for Tuesday, 18 December, but that is subject to Hamilton's postponed Scottish Cup tie against the same opponents being settled by then.

There is a slight thaw forecast over the weekend

Their Cup game at the Bet Butler Stadium has been re-scheduled for Monday, with Wednesday the fall-back date if it is postponed again.

Accies secretary Scott Struthers told his club website: "The freezing temperatures overnight for the past 12 days have not let up and yesterday's heavy rain also froze on top of the pitch.

"It is bone hard everywhere, with thick puddles of frozen ice in many places. There is frost in the ground to a depth of three to four inches.

"At this moment, we will play Dumbarton away on Monday in the William Hill Scottish Cup, at the third time of asking.

"There is a slight thaw forecast over the weekend, which gives it half a chance for Monday.

"But there are again freezing temperatures forecast overnight on Sunday.

"That game will be reassessed again on Sunday afternoon and Monday morning."

The new date for Cowdenbeath's match against Thistle - Saturday 2 February - is subject to the home side's involvement in the Scottish Cup fifth round.