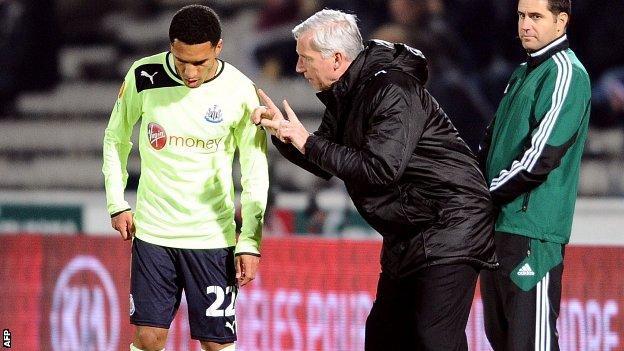 Newcastle boss Alan Pardew plans to let some of his younger players leave on loan in the January transfer window.

An inexperienced Magpies side in their final Europa League Group D match, although they had already qualified for the last 32.

The truth of it is that a lot of our young players who we played tonight, I was expecting a little bit more

"I will probably look at loaning a few of those who played, hopefully after January when I have got a stronger position in the squad," said Pardew.

"I think they need to learn a little bit more about this game."

Victory for Newcastle in France would have seen them finish top, but two goals from Cheick Diabate meant they went through as runners-up.

It was a difficult night for Pardew's young players and he admitted some of them might have to prove themselves elsewhere before being given another opportunity.

Pardew made nine changes from Monday's victory over Wigan, with striker Nile Ranger making his first start since April 2011.

The likes of Davide Santon, Cheick Tiote, Jonas Gutierrez, Hatem Ben Arfa and Demba Ba were all left at home with injuries, while Steven Taylor and Yohan Cabaye remain on the long-term casualty list.

Rob Elliot, Shane Ferguson, James Tavernier, Sammy Ameobi and Mehdi Abeid were among the players to come in.

"The truth of it is that a lot of our young players who we played tonight, I was expecting a little bit more," said Pardew, whose side finished fifth in the Premier League last season but currently sit 14th.

"We will have a good look at them now because I don't think the opportunity is going to come around for them again this season unless we really suffer like we did tonight in terms of who was available - I didn't leave anyone behind who was fit.

"I was just a little bit disappointed that we didn't give it a better go in terms of trying to retrieve the situation after conceding the first goal.

"Certainly looking at my group there, I think they need to learn a little bit more about this game away from the black and white and the pressure of the jersey here and the level we are playing at," he added.