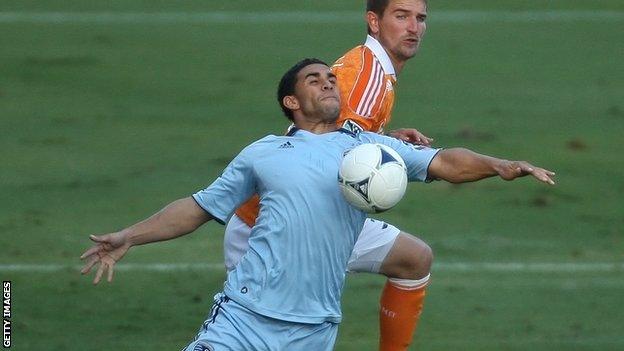 Buddies manager Danny Lennon is assessing the 22-year-old with a view to signing the Englishman in January.

St Mirren boss Danny Lennon is taking a look at Sporting Kansas City forward Dom Dwyer with a view to signing him on a short-term loan deal in January.

Lennon said: "The reports we have had on him are positive."

Dwyer was with Norwich City as a youth but has spent his senior career in the United States after attending Tyler Junior College in Texas.

After winning the national junior college player of the year award, he moved to University of South Florida, turning professional with Major League Soccer outfit Sporting Kansas City in January.

With the MLS in close season, a number of players are looking for short-term deals around the world to maintain match fitness.

"I became aware of Dom through an agent," said Lennon. "Kansas City's season is over and there are one or two of the MLS players trying to get over.

"It has been on the back burner for a month to six weeks, but Dom is over now.

"It would only be a short term one for us, so we will have to wait and see."

Meanwhile, Lennon is "bracing" himself for January offers for midfielder Kenny McLean.

"I haven't spoken to Kenny but the best thing that he can do is to keep doing his talking on the pitch and what will come for him will come, there is no doubt about that," added the Buddies boss.

"We haven't had direct or official interest but it is no secret, you see scouts at every home game.

"But I welcome anyone to come and see what we are doing at our football club, it is a sign that we are heading in the right direction.

"Sometimes it is out of your control but as long as we are getting the best out of him every time he puts on a black and white jersey then he is doing his job."