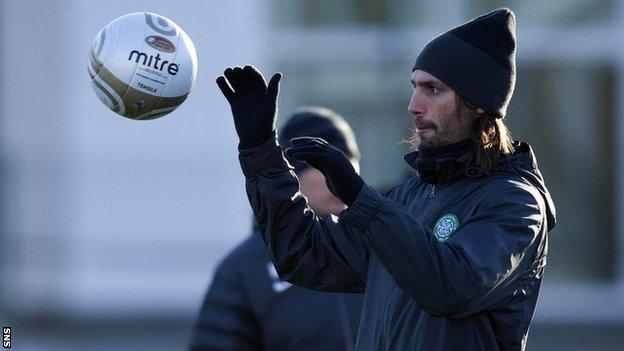 Georgios Samaras has warned Celtic's Scottish Premier League rivals that the champions can now focus fully on retaining their title.

Celtic lead the table by a point but have had their worst start to a league campaign for 14 years.

"It's not been easy, not only for us but all the teams playing in the Champions League," he said about the distraction of Europe's top trophy.

We are going to have more rest between games

"Hopefully, now we will be more focused on the SPL."

Celtic lost 2-0 at home to Kilmarnock in October, four days after Barcelona snatched a late victory over the Scottish champions in Spain.

Such post-Champions League blues have bedevilled Celtic's season and Kilmarnock will be hoping for a repeat at Rugby Park.

"But, from yesterday, all we are thinking about is the game against Kilmarnock," said Samaras.

"We know going from Champions League to Scottish Premier League, the games weren't the best.

"We need to change it and be more focused.

"We are going to have more rest between games and it's a good time to start winning games in the SPL.

"Now it is just the SPL, it is a good time to start a run and open a gap over the other teams."

Samaras also believes that Celtic could now relax more in the Champions League now that they have qualified from Group G.

"Winning the SPL last year gave us more belief as a team.

"Our realistic target was to go through. We knew that Barcelona would be first and us, Benfica and Spartak would fight for the second spot.

"I felt we were the better team than the other two and we went through.

"That was the realistic target and now we are going to enjoy the games.

"It's a great achievement to be in the top 16 teams in Europe and among the elite. We are happy.

"All the teams have great players and we are going to respect them like they will respect us."