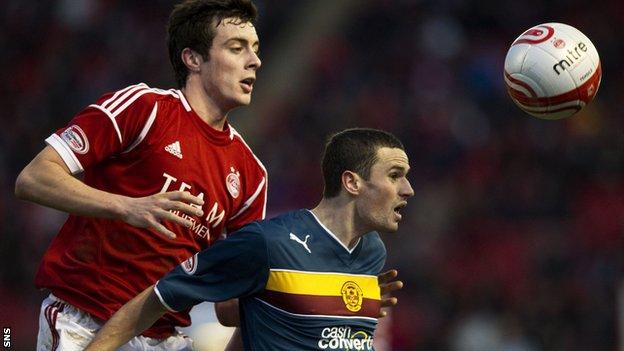 Aberdeen defender Joe Shaughnessy has signed a contract extension that lasts until the summer of 2015 after breaking into the first team in recent weeks.

The 20-year-old Irishman made his debut for the Dons two seasons ago.

But he had to wait until last month to make his next appearance and he has started the last two fixtures.

Delighted Shaughnessy said: "I look forward to trying to establish myself in the first team, although there is competition throughout the team."

Aberdeen officially announced the deal on the day when they also admitted that 18-year-old winger .

Manager Craig Brown believes that Fraser has made the wrong decision for the development of his career and was pleased that Shaughnessy had come to a different conclusion.

"Joe has been very patient and, when he came in a couple of weeks ago due to the number of injuries we have, he seized it with both hands," he told the Aberdeen website.

"We want players here who are committed to the club and Joe has demonstrated a real desire to be part of the cause going forward."

Shaughnessy joined Aberdeen in 2009 after spending his youth with Mervue United and Salthill Devon in his homeland.

He spent much of last season on loan with Forfar Athletic, making 26 appearances and scoring three times for the Second Division outfit.