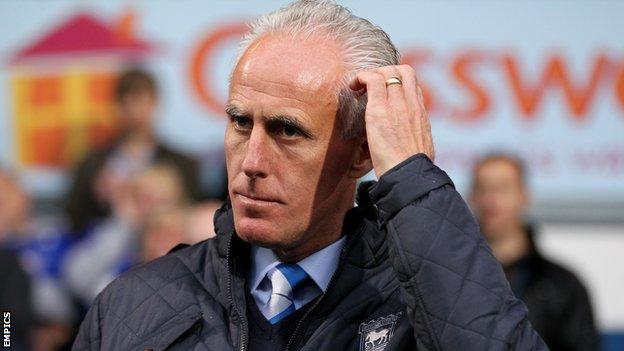 Ipswich Town boss Mick McCarthy has said he has no interest in discussing new deals with players while the team are in a relegation battle.

Midfielders Lee Martin and Andy Drury are among those out of contract at the end of the season..

Town have lost a number of players on free transfers in recent seasons, with David Norris, Grant Leadbitter and Gareth McAuley all leaving at the end of their deals.

Martin and Drury could do the same this summer, while Town have an option to extend captain Carlos Edwards's contract by a further 12 months.

"I have a bit of a problem with going around and offering people contracts," added McCarthy, who has lifted Town out of the Championship relegation zone since replacing Paul Jewell as manager five weeks ago.

"It can have a good affect, it can have a negative affect. I've had it where someone signs a nice new three-year deal and then they don't kick a ball until about March - that's no good to me.

"My job is to keep the team in the league and we've had a good start but take your foot off he gas for one moment you find you've lost three and you're back in the bottom three."

McCarthy must also decide whether to extend the loan spells of Bilel Mohsni, Stephen Henderson and DJ Campbell from Southend, West Ham and QPR respectively in January.

"Let's wait and see what January brings," he said. "They're all on short-term deals with recalls for one reason - because if their clubs need them they can call them back.

"But if they don't need them we can discuss it and prolong the loans."