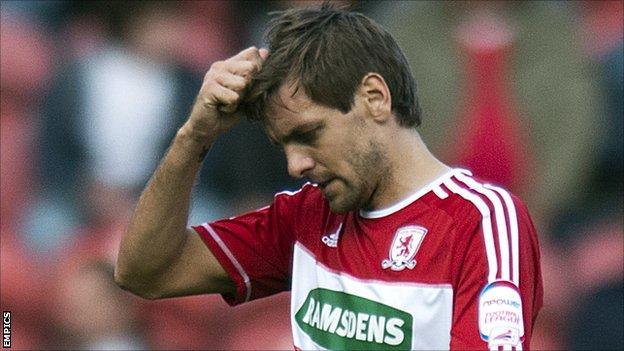 Middlesbrough manager Tony Mowbray has said the return of Jonathan Woodgate to the first team could prove vital to the Championship promotion bid this term.

Woodgate, 32, has made 11 appearances this season, although a calf niggle has forced him out of the last four matches, three of which were defeats.

"You don't realise until you see him train the things he does so well for the team," Mowbray told BBC Tees.

What they said about Woody

He added: "If we can improve on that [the 11 games] for the rest of the season and get him into a good percentage of matches then I think he'll really help the cause."

The England international defender returned to his home-town club for a second stint during the summer after a spell at Stoke City, and the influence of a player who cost Real Madrid £13.4m in August 2004 has been pivotal to Boro's push for promotion.

"The secret for Jonathan is to try to get him into a run of games," Mowbray added.

"Three games a week makes it very difficult and we have to pick and choose the games, but when every game comes along we have to win them so there are no throwaway games.

"It's difficult to pick the games he'll play in and those we'll give him a rest - making sure his body doesn't break down - but that's for us to discuss, the medical department, sports science, Woody and myself, we'll try to get that right."